A new issue of The Dead Mule School of Southern Literature has been released: 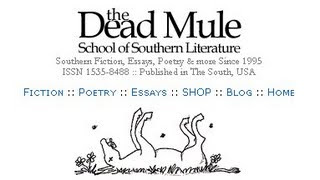 The November 2009 issue of Roadrunner has been released:


The results of the Irish Haiku Society International Haiku Competition 2009 have been released. Scroll down the page to see the competition results:

Please consider celebrating the end of a successful year by participating in two haiku activities for the December 31, 2009 Sketchbook:


Sketchbook is now accepting submissions for the next issue. We publish all genre: tanka, rengay, haiga, renku / renga or other eastern genre as well as western genre such as free verse, cinquain, fibionacci, tetractys sestina, sonnet, etc. Here is a link to our current Sketchbook.

Submissions are due by 20, December 2009. Send to: submissionseditor@poetrywriting.org

The Sketchbook Editors send you seasons greetings and a happy new year. We look forward to your submissions in 2010.

The next issue of Sketchbook, Dec. 31, will be released during the first week of January 2010 at http://poetrywriting.org An e-mail notice will be sent to you when Sketchbook goes online.

Limit: 6 haiku, in English (please note: poets from Serbia, Croatia, Slovenia, Bosnia and Herzegovina may send their haiku in their mother tongue)

The (one) envelope must include:


* 4 copies of 6 haiku, each marked with the nickname


In the body of email: 6 haiku, in English; author's name, mailing address, e-mail address, phone number.
Posted by Curtis Dunlap at 6:04 AM