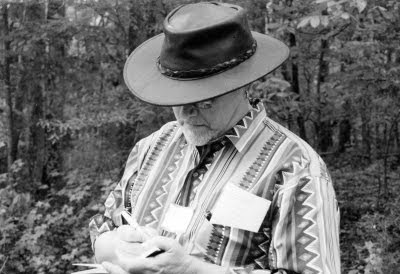 Untitled
Innovative educators all, the state of North Carolina hired us to travel along the coast, across the heartland into the mountains to cajole and canoodle conservative teachers into using our unorthodox classroom approaches. Intoxicated by proximity, we hovered around each other buzzing from one constantly re-forming group to another, from off-beat coffee shops to two-star motel rooms around the Tarheel state.

After dinner, we end up at the New Bern beach. You and I drop behind the others, sinking deeper into the swell of our conversation, unable to stop talking about what we cannot stop talking about. The others disappear along the dark coastline. We edge toward the water.

ten years later
in your voice on the phone
salt air

If you would like to participate in this series, send a photo of yourself composing a poem or writing or a picture of a location where you enjoy writing, along with one of your poems (the type/genre of poem doesn't matter). This series will allow us to see the various locations that inspire us or where we go to write.
Posted by Curtis Dunlap at 6:14 AM

I was thinking of putting together a post of Solstice Haiku.

If everyone sends me a solstice haiku, including your readers, I'll put together something that we can all post at our respective blogs.