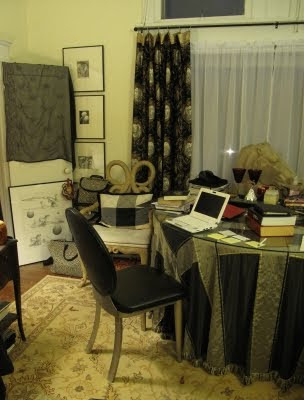 As stoic sentinels, they wait for me
o'er lane beneath the shadow of their arch.
These trees, that once were proudly kept, do see
how time, relentless, never slows its march.

They call with silent beckoning. Their twigs
the distant, outstretched limbs of mother's arms;
but close, their dark embrace is but a prig
to steal my peace, so toxic are their charms.

These blackened trees, with blacker hearts to match,
adorn the ruthless white of sun-drenched snow
and pull, with ties my childhood did attach,
entreating me to face an ancient foe.

A hollow place of blood relations, home;
so why is there this need to reconcile
a past so fetid that I have to comb
through years of buried truths extremely vile?

At twelve I was unspoiled and newly bloomed.
The green of spring just budding from each limb
cast shadows long to cool the lane consumed
by laughter, shoeless feet and childish whim.

But summer honey turned to bitter tang
when autumn stole my father from my life.
The midnight hearse crept by as heartache sang.
The trees bent low as though consumed by strife.

November wind rang hollow through the trees,
reminding Mother of her lover lost.
Her empty arms clutched wildly at the breeze
to snag another, but her heart was frost.

She drew a man, I cannnot say his name
(the fifteen elms did shudder when he passed).
He had no wish to thaw her heart with flame,
instead he sought to hold her sorrow fast.

He used her pain to gain a stranglehold,
as puppeteer, controlling what she'd see;
and with the blinders quite secure, stone-cold
he turned attention and his lust to me.

Through winter nights as chill as polar ice
I fought to keep my heart above the dread.
I prayed the leading trees would soon entice
a savior knocking, knowing the unsaid.

Without a word, he'd pluck me from the door
and cast a golden lance into the thief
who dared defile a child, then he'd restore
my mother's heart, releasing it from grief.

At seventeen I passed between the elms
one final time, their branches sick with blight.
My father's ghostly hand reached from a realm
where restless souls are driven still to fight.

He punished root and bark and sagging bough
for failing justice, failing to defend
his daughter. As I passed, I heard him vow
my vengeance in the whisper of the wind.

The lengthy shadow of the elms did reach
from continent to continent. Desire
for peace was never stronger than the leech
of hate that was this all-comsuming fire.

True peace was a mirage upon the sand,
and though I left the man without a soul
I never lost the image of the hand
that could have stopped the damage, kept me whole.

And now she calls to me with dying breath -
a mother lost, a woman with regret.
But who am I to sanctify her death
while Father's breezes whisper, "Don't forget."

And yet I'm here. I stand before these trees
to watch them shudder in the bitter frost,
their hearts still black. I still recall my pleas
unanswered from a childhood long since lost.

Forgiveness. Is that something I can give
the dying? Do I want to know her heart,
or do I find it safer that I live
still damaged by the weakness on her part?

I hate the man who crept into my bed
pretending that his love was something pure,
and yet he'd never had my trust. The dead
will reckon with his tortured soul, I'm sure.

But what of Mother - loved and loving wife,
betrayer of the child when asked to choose?
Her failing cut much deeper than the knife
I used to slice away his damned abuse.

An odium so strong it smells of musk
draws deep from me desire to turn and run.
The leading trees turn gray with coming dusk
and I must choose to save us both, or none.

If you would like to participate in this series, send a photo of yourself composing a poem or writing or a picture of a location where you enjoy writing, along with one of your poems (the type/genre of poem doesn't matter). This series will allow us to see the various locations that inspire us or where we go to write.
Posted by Curtis Dunlap at 6:04 AM

oh what a lovely space! thanks for sharing it and your poem :)