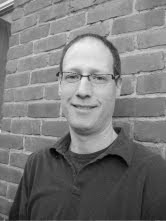 David Grayson was born in San Francisco in 1969. Due to his interest in short poems, he became intrigued with haiku. He started experimenting with haiku in 1998. He joined the Haiku Poets of Northern California in 2002, and has been active in HPNC for several years, currently serving as Vice President. He is featured in A New Resonance 6: Emerging Voices in English-Language Haiku, and is also a featured poet in My Neighbor, the 2009 installment of the Two Autumns chapbook and reading series. He served as Editor of Moonlight Changing Direction, the 2008 Two Autumns chapbook.

His haiku have won First Place in the 2008 Gerald Brady Senryu Contest, and Third Place and Second Honorable Mention in 2008 Anita Sadler Weiss Memorial Haiku Awards. He was the recipient of the Mariposa Chime Award for 2007.

Grayson has also written numerous book reviews and essays. Essay topics range from the relationship of modern art and haiku to Hebrew-language haiku to the formal characteristics of short poems.

He works in the Internet industry, currently as Director of Product Management for a large consumer web company. He lives with his wife and two children, in Alameda, California.

Philosophically and temperamentally, I value simplicity: boiling things to their essence. I also like the practice of suggestion, and its subtle tether. This helps haiku retain some mystery, which is essential to my experience of art.

I'm drawn to other forms of short poetry as well. Beyond short poems, I've been a longtime reader of 'mainstream' poetry, especially poetry in translation: Eastern European, Scandinavian, Spanish and Latin American.


Halloween party—
after a few drinks
the masks come off

street corner memorial—
my four-year-old
asks for the balloon

choosing a Christmas tree—
the kids think
every one is perfect


If you've been enjoying this weekly series and have not contributed, please consider sharing your response (whether it be for haiku or tanka) to the three little questions that David answered. You must be a published poet in order to participate.

Jörgen Johansson will be our guest next week.
Posted by Curtis Dunlap at 6:02 AM

I'm really intrigued by the essay topics, and whether they are available online?

David Grayson:
"Essay topics range from the relationship of modern art and haiku to Hebrew-language haiku to the formal characteristics of short poems."

Thanks for asking! Most of my essays have been published in print journals. One piece on Alexander Calder and haiku was published in Frogpond in 2006, and another (about Robert Rauschenberg) was published in Mariposa earlier. The Hebrew haiku article was published in Hermitage, and I’ve published pieces on short poems in a few places. “Short Poems: Nothing To Take Away” is at The Cortland Review.

I’m hoping to compile my essays online sometime this year … when I have more time!

I'm impressed by the depth and vision you have with your artform, David---congratulations! Chaya Rivka

I wasn't familiar with Robert Rauschenberg but we all see the effects of his work in Britain and mainland Europe.

Please do let me, and Blogging Along Tobacco Road, know when you've compiled your essays online. I'll definitely be visiting! ;-)