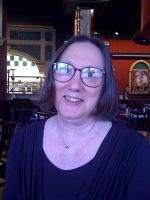 Susan Delphine Delaney MD, MS is a psychiatrist practicing in Plano, Texas. Her therapy dog, Gabriella, assists. Susan has been writing small poems since 1968 when a friend gave her a book with the poems of Basho and Issa. Her haiku and senryu have been published in 19 different haiku journals, books and anthologies. Her tanka have appeared in Lynx, American Tanka, Firepearls and Atlas Poetica. Susan is the founding Vice President of the Fort Worth Haiku Society and founded the Haiku Poets of North Texas.

1) Why do you write tanka?
I really never planned to write tanka, as I considered learning to write good haiku a persuit that could last a lifetime. Nonetheless, I published a tanka now and then in Lynx and American Tanka. Then my e-friend M. Kei asked me to write some tanka for Firepearls. Then I was invited to send some to Atlas Poetica.

I believe that some nature moments and some relationship moments fit the tanka form better, as the length of a tanka allows a bigger 'setup' of the situation than a simple kigo could ever provide.


2) What other poetic forms do you enjoy?
Haiku, senryu and free verse. I am particularly fond of renga and have written e-renga with poets from all over the world.


3) Of the many wonderful tanka you've written, what do you consider to be your top three?

If you've been enjoying this weekly series and have not contributed, please consider sharing your response (whether it be for haiku or tanka) to the three little questions that Susan answered. You must be a published poet to participate.
Posted by Curtis Dunlap at 7:17 AM

Susan's work will also appear in the upcoming anthology 'The Sound of Poets Cooking'. As will the work of other haikuistas.

Lenard and I heard Susan give a fascinating talk about the role of proprioreceptors (sensors all over our bodies that report the position and condition of that part of the body) in the making of memorable haiku. It was at the HSA meeting in Fort Worth, back in 2008:

that sounds like an interesting talk, Dave. Like Susan I thought that I needed to stick to haiku until I perfected it - ha! But, now she has me thinking I should branch out. Much enjoyed reading these, Susan.

Hi, Susan, Your tanka "again and again" is telling to me. One of the reasons I tend to write more haiku than tanka is that it helps remove me a bit from some of the trauma of life. My son died the same day as the Challenger explosion so when I read your tanka that whole feeling came back again...it never fades. Thanks, Merrill