Saša Važić sent results to the:

•   Stephen Addiss — Cloud Calligraphy
This volume finds Addiss at his most playful and features 6 of his inimicable haiga as well. “Stephen Addiss creates an interconnected meditation with both brush and ink. Each
poem starts on the page, but finishes in the reader’s mind! His poems are so full of movement they have the power to stop us, and put us back in the moment.” —Stanford M. Forrester, Editor, bottle rockets

•   Dimitar Anakiev — Rustic
Anakiev’s fourth book with RMP (At the Tombstone, Kosovo Peonies, balcony) features 50 recent poems, each reflecting upon a different keyword, and each with copious notes as to the origins of the poem and the concept at hand. ". . . a literary historian’s dream, providing the author’s statement of intent and detailed notes. Reading the individual poems in context shows them to be simple and profound, inviting the reader to join the poet in contem-plating culture, history, and our collective roots in the natural world, including chaos and war.” —Johnye Strickland, Professor Emeritus, University of Arkansas

•   Jim Kacian — where i leave off / waar ik ophoud
Produced by ’t schrijverke of the Netherlands in a bilingual (English / Dutch) edition, this is Kacian’s 15th book devoted to haiku. This one explores the one-line haiku, and includes a mini-essay on the subject, as well as more than 50 examples, along with a selection of his miniature “one-bun,” haibun where the prose is limited to a single sentence. "Kacian breaks new ground by systematically exploring the possibilities of one-line haiku in English.” Max Verhart, Editor, Vuursteen

•   Dietmar Tauchner — as far as i can
This is Tauchner’s long-awaited first full-length book of haiku in English, and he doesn’t disappoint. The book pivots about a visit to the Mauthausen Prisoner Camp, which provides perspective on the poet’s life and pursuits.  “Lean and quiet, the haiku in this excellent collection convey deeply felt connections with nature, other people, and the inner self. They  dignify the commonplace and affirm the unknown and mysterious within the familiar.” —Peggy Willis Lyles, Editor, The Heron’s Nest

•   Jim Westenhaver — long enough
This poet’s first book of haiku suggests he will be a name to watch. This elegiac meditation on the fleeting touch between two people will stay with you. “What is unsaid pulses through long enough, and yet this slim collection of 27 poems overflows itself. Each haiku speaks to the next; the white space between vibrates with increasing energy until the last poem ricochets back to the first, demanding the book be re-read wholly anew.” —Eve Luckring

•   where the wind turns: The Red Moon Anthology of English-Language Haiku 2009
The fourteenth volume of the most decorated series in haiku history, where the wind turns features 161 poems, 12 linked forms, and 6 critical essays on the reading, writing and study of the genre. “Simply the best thing out there.” —Charles Trumbull, Editor, Modern Haiku

•   contemporary haibun Volume 11
This eleventh volume of the only series devoted to the best haibun and haiga produced in English features 70 poems and 32 haiga.. “contemporary haibun has stood alone, for nearly a decade, as the chief vehicle and bulwark of the burgeoning haibun movement in English.” —Jeffrey Woodward, Editor, Haibun Today

•   Carolyn Hall — How to Paint the Finch’s Song
Hall’s second major collection, out in June.

As always, thank you for your continuing support.


And finally, moonset will cease publication. The final issue should arrive in mailboxes soon. I personally would like to thank everyone involved in bringing this quality journal to life. 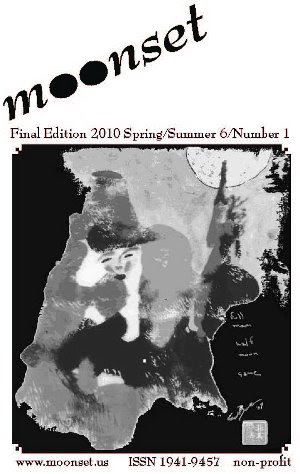 Posted by Curtis Dunlap at 6:56 AM

Too bad about moonset - such a wonderful publication.