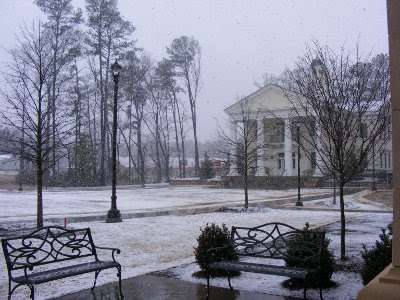 He would walk out to the garden and eat an onion like an apple.
He wore the camel's hair and leather but did not sup on cicadas and tupelo honey.
He would take the buttermilk in a tall glass and stir in the cornbread.
He would take dead birds and taxidermy them and put them on the mantelpiece.
He would cut wooden swords for you from plyboard, shields too.
He would use the hearing-aid faltering as a way to ignore usual bullshit.
He would shoot up insulin in a matter of fact way, talking of football.
He would let crows fly out of his crow's feet around his watery eyes.
He would not comfort you--he would reassure you--hand you a set of tools.
He would plant the okra plant the squash plant the 'maters husk the hewn.
He would never complain he would never swear he would never part his hair.
He would not own a gun or talk bad about my mom or abandon a friend.
He would not cry when rattlesnake killed Snowball the cat but he cried for Fred the terrier.
He would never leave the table without a burp and he loved those Cheez-Its.
He would claim only once to have seen a UFO, and it was only real for me in his voice.
He would build miniature cities and dollhouses and sheds that were replicas of his shed.
He would become the bear that talks to me in my dreams, and he would be stern.
He would walk with a walker towards the end he would levitate he would hover.
He would always answer the phone when I called and say, "Hey Buddy-Ro!"
He would whittle, never spit--he would not cantanker--he was even-keel.
He would build a tire-swing for anyone--he would comb his hair back smiling.
He would fix a railroad track in the knick of time and steal two seconds for himself.
He whittled toothpicks of the next nonchalant moments, birds stealing splinters for nests.


If you would like to participate in this series, send a photo of yourself composing a poem or writing or a picture of a location where you enjoy writing, along with one of your poems (the type/genre of poem doesn't matter). This series will allow us to see the various locations that inspire us or where we go to write.
Posted by Curtis Dunlap at 6:27 AM

Being a transplanted Alabama girl I LOVE this. I find bits and pieces of my ex father-in-law and old uncles in every line. Thanks for sharing.

Terri--I was born in Alabama, actually--thanks for your comments. Thanks to you as well, John--I am glad you liked the poem!