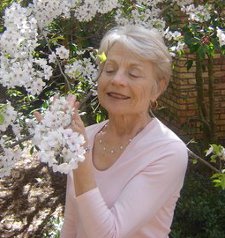 Marilyn Appl Walker grew up on the High Plains of Kansas near the Colorado border. She is a poet who now lives in Madison, Georgia with her husband, Marshall. In 2002 she became acquainted with haiku after ordering several poetry books. Since 2003, her work has appeared in leading haiku journals and has received honors in Canada, Japan, the United States and the United Kingdom.

1) Why do you write haiku?
There are many reasons but I think mainly my hope is to capture a moment in time and make that certain moment continue to live, much in the way a photo makes a moment live. In addition to sharing my own haiku, it is exciting to be a part of a writing community and look forward to each poet's contribution to the genre.


2) What other poetic forms do you enjoy?
Through the years I have enjoyed rhymes, free verse, and more recently tanka; but haiku has become my first love.


3) Of the many wonderful haiku you've written, what do you consider to be your top three?
As of the moment, these are my choices.


thunder moon
odor of the rodeo
kicking up

Many thanks Curtis, for making this series so special.


If you've been enjoying this weekly series and have not contributed, please consider sharing your response (whether it be for haiku or tanka) to the three little questions that Marilyn answered. You must be a published poet to participate.
Posted by Curtis Dunlap at 5:54 AM

It is great to see you here! Of these, I particularly like "thunder moon."

Thanks for sharing, Marilyn. I particularly enjoyed "winter drizzle"

This haiku is a treat to read again and again:

Marilyn,
just visiting a favorite site and what joy - reading your sparkling poems this morning - blooms like your tree.