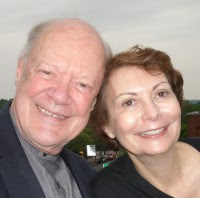 Thomas Heffernan has been making haiku since the mid-1980s in Okinawa where he co-founded the bilingual haiku magazine Plover/Chidori. His English-language haiku have received a number of Mainichi awards and also Itoen and JAL (Japan Air Lines) prizes; he was awarded the 2006 Kusamakura Grand Prize for haiku. He has published ten books and chapbooks. His The Liam Poems about an ancestral kinsman, the Irish-language Jacobite poet William Heffernan the Blind (as W.B. Yeats called Liam Dall O’hIfearnain), received the 1982 Roanoke-Chowan Prize.

[Photo of Thomas Heffernan and Roberta Beary by Curtis Dunlap]

To put into words traces of things I wonder at… to present what otherwise would be past.

Tanka. Ghazals. Sonnets: some are available on the Ploughshares website; others, here and there in my books.

Some haiku of mine, not necessarily favorites or even representative.

Such a being as this recalls the name of our Okinawan haiku magazine:

a one-legged plover
standing in the empty lot...
winter

even after
the operation
the midnight tomcat

shop window
reflecting the other side
of the street

now and then
night air moves
the reed curtain


If you've been enjoying this weekly series and have not contributed, please consider sharing your response (whether it be for haiku or tanka) to the three little questions that Tom answered. You must be a published poet to participate.
Posted by Curtis Dunlap at 6:10 AM

I've been a student of haiku for around seven years now but still consider myself one with moderate skills. The grace of these haiku move me deeply. He's so very good.

my pen
crosses the page...stops
a mockingbird sings

It's such a pleasure to "meet" you after finding your haiku. I particularly like "even after"...there's a certain spirit to it that gifts me. Thank you.