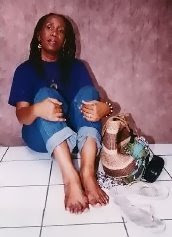 Gillena Cox, lives in St James, Trinidad in The Republic of Trinidad and Tobago. She is a retired library assistant. Her poems have been published in several anthologies and online zines. Moments, published in 2007 by AuthorHouse, is her first solo publication. Gillena has two adult children, a daughter named Yanda and a son named Khama. She writes: "I am married but living alone."

Writing began as a fun thing to do, scribbling my thoughts on paper. Then, in the late 90s, I bought my first computer and remembered studying haiku in the '70s at the University of West Indies. Researching haiku via the Internet led to Yahoo's haiku groups and eventually to the World Haiku Club. My haiku journey had begun. . .

Presently I'm enjoying RENHAI, a form created by Vaughn Seward; there is a story behind this though: I had been enjoying the challenges of writing collaborative poems. Vaughn and I attempted to write a rengay and, for some reason, we just didn't...click. I remember telling him in an email that this was the worst writing experience I'd ever had. We stopped writing rengay. Sometime later, I received an invitation from Vaughn to write a new collaborative form called renhai. I joined a renhai Internet group, read all the introductory papers and dove in, partnering and writing with many poets. If I remember correctly, my first partner for renhai was Shanna Baldwin-Moore. I've continued experimenting with this new form. I enjoy writing solo and collaborative renhai sets. I also enjoy reading Shakespeare's sonnets, though I haven't written many. I like haiga and I'm currently journaling in this form on my 'Lunch Break' blog.


3) Of the many wonderful haiku you've written what do you consider to be your top three?

I remember my first haiku accepted at The Heron's Nest, a poem that is very dear to my heart. That first haiku is also on page 15 of my book 'Moments'.


alleluias
a trapped bird flutters about
at church


Then there's this haiku, written within a haibun entitled 'Hurricane Ivan' accepted and published at Simply Haiku in 2005.


hurricane warning
in the uncanny stillness
a hazy sunset

This haiku was the first post to my blog:


If you've been enjoying this weekly series and have not contributed, please consider sharing your response (whether it be for haiku or tanka) to the three little questions that Gillena answered. You must be a published poet to participate.
Posted by Curtis Dunlap at 7:10 AM

Wow, I feel I know you already! And here you are, on tobacco road!
So much we don't know about eachother.

I am inspired to pick up Haiku again,
Thank you for your work, Gillena.

Thank you for sharing your haiku, Gillena. I especially enjoyed the third one--we never think of the Rooster's crow as a song do we?

I really enjoyed the rooster haiku too.