When Collin Barber informed me last summer that he was going to be in my state on business, I knew that I would have to set aside some time to meet this award winning poet. Collin, an MRI Technologist for a hospital in Memphis, Tennessee, would be in a series of training classes in Cary, NC.

Collin was originally scheduled to be in Cary during the month of October, a time that was great for me. The fall 2009 semester would be well underway at the college where I work, allowing me to use a couple of vacation days to meet my friend. Due to project delays, October's trip soon became a November trip, which was fine; my job responsibilities would not hinder me from meeting Collin until the first and second week of January 2010, the start of the spring semester, a time that is very busy for me.

As November approached, I received an email from Collin stating that he would be in Cary during the week of January 11 which, unfortunately, fell right in the middle of the start of the spring semester. Thoughts of using vacations days to meet my friend vanished; there is absolutely no way I can ask for days off during the start of a semester.*

Undaunted, I checked my calendar and decided that I'd leave work early on January 14th and visit Collin. With camera, camcorder, laptop, and suitcase in hand, I departed Wentworth, NC at 3 p.m. for the nearly three hour drive to Cary, dodging deer along the way.

It may interest the reader to know that Collin and I have been friends for about five years. We met, as many folks do these days, via the Internet. I've followed Collin's rapid progress as an accomplished haiku poet via his web site and journals for years. Versatile, Collin does not limit his creativity to one genre. He writes senryu, tanka, haibun, rengay, and has had a number of haiga published. We have critiqued each other's work (though he seldom needs critiquing) and collaborated on a number of unpublished rengay. A selection of our poems appeared in A New Resonance 5: Emerging Voices in English-Language Haiku, a Red Moon Press anthology.

I arrived in Cary at around 6 p.m., checked into my hotel room, unpacked, then phoned Collin's room. Not long after, we greeted each other in the hall and departed from the hotel for conversation and burgers at a nearby restaurant. Well, that's not exactly what happened, we became...misplaced amid the hustle and bustle of Cary's traffic on US Highway 1. I did not realize it at the time, but our collaborative sensibilities would come into play in getting us fed and back to our hotel.

lost —
a visitor to my state
gives me directions

With the fear of impending starvation behind us, we settled down for dinner at O'Charley's Restaurant. Conversation centered around our careers, family, and, of course, poetry. After dinner, we returned to my room where we sampled the goodness of Southern sake, drinking a toast to friendship and poetry. We talked about the poets who have inspired us, many of whom are undoubtedly reading these words. We read and critiqued new poems and exchanged stories about poems, events that inspired us, for some of our work that has already been published.

Exhibiting his vigilant "haiku eye", Collin reached for a pen and pad, composing the perfect poem for the occasion: 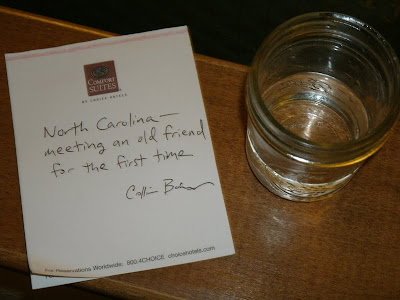 [Click the picture for a larger image.]
Time slipped away from us much too soon and by midnight we realized that sleep would be necessary for us to function the next day, Collin in his classroom and flight back to Arkansas, and me driving to my job.

A person can get to know someone through email and their creative works. Though Collin and I had not met prior to January 14, 2010, we experienced a sense of camaraderie and friendship in those few hours that will, undoubtedly, last a life time. 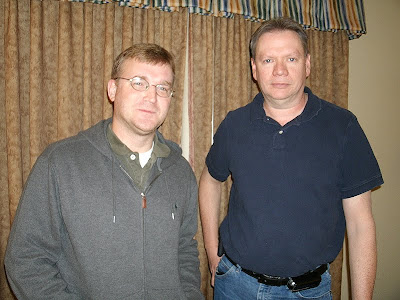 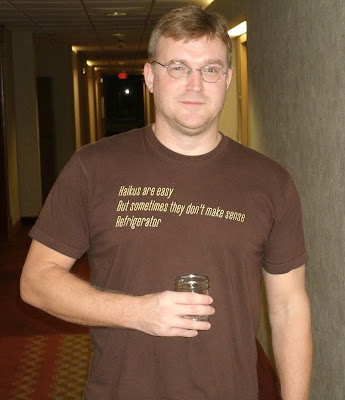 [Collin Barber displays his sense of humor about haiku.]
* Which, if you were at Haiku North American 2007, is why you saw very little of me. I would visit HNA events briefly, then go back to my hotel room and work via a laptop. One of the most difficult things I've experienced in my life is not being able to fully participate in that which I love. Still, I'm thankful to be working and for the time I spent at HNA 2007.
Posted by Curtis Dunlap at 5:51 PM

Email ThisBlogThis!Share to TwitterShare to FacebookShare to Pinterest
Labels: Meetings

The photo of Collin's 'ku would make a great book cover.

I hope that you two saved some of that sake!

Well, actually, no. It went as fast as the hours.

The next morning, Collin went to his class and I drove three hours back to work. Got to work and had to help unload and unpack 80 new computers. Whew!

This was wonderful reading. Thanks for letting me tag along,for sharing your photos & Colin's link/Links- deer crashes,yikes! ( I agree with Aurora. I can almost see a Narrow Road To North Carolina, come out of this, with your sake photo as cover.) Much enjoyed- Michele

Thank you all for the comments.

I wish I had the resources and time to visit other poets, to make True Haiku Stories a regular feature.

I dodged four deer crossing the road in Caswell County. They are everywhere! One day last week, I counted 21 on the way home from work.

Curtis, 'twas a great time. I enjoyed meeting you even though it felt like we'd known each other for years. Thanks for sharing this here! Hope to meet up again one of these days . . .

i totally agree about how that pic with the southern sake would make an awesome book cover!

how great that you guys were able to meet up :)