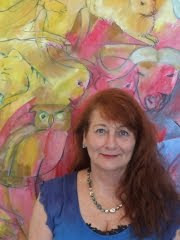 Lorin Ford writes haiku and longer poems. She lives in Wurundgeri country, close to the city of Melbourne in drought-stricken Victoria, Australia. Her haiku have appeared regularly in Australian journals and anthologies and in haiku journals based elsewhere in the world since the beginning of 2005. 3 Lights Gallery featured what light there is, a collection of thirty of Lorin’s haiku, from September to December, 2009. Lorin’s haiku placed first in both the 6th and 7th paper wasp Jack Stamm Awards. Her haiku book, a wattle seedpod was awarded the great honour of first place in the 2009 HSA Mildred Kanterman Awards. Lorin is haiku editor for Notes From the Gean.

I came to writing haiku from writing longer poems. My interest began as late as 2004, on coming across Dhugal Lindsay’s


In an instant, Dhugal’s tiny poem reconnected me to my early childhood via the sudden presence in memory of picking up washed-in moon jellies on Seaford beach. It also showed me, metaphorically, that haiku can work like a lens (as a small, stingless jellyfish on your palm does), focusing and magnifying the kind of experiences and connections in and with the world which are deeply formative and nourishing. This was my first ‘haiku moment’ and the beginning of my learning to read haiku. There are many haiku that’ve moved me similarly since.

I write haiku because I want to do what Dhugal and others have done: write in context of the natural world which has informed me from my beginnings and continues to inform me when I relax and acknowledge that this is continually happening. I like to write in relation to the things of nature, their presences which nourish and ground my inner life and my being in the world. There is a sacred duty among native Australian peoples that the stories of country and all that makes country must continue to be told or else all will slip back into the formless, the uncreated. There is immense human wisdom in this. Haiku, for me, offers a way of sharing in this continual remembrance and recreation of the world, which after all, is part of us as we are part of it. The communal aspect, mainly via the internet, for me, so far, is important to me, too.

It isn’t primarily form that attracts me to a poem. I enjoy many kinds of poems, classic and contemporary, of many schools. The list (from Auden to Zukovsky) of favourite poems is far too long, but I can say that my favourite play is still Shakespeare’s last, ‘The Tempest’. Since discovering haiku, I’ve found much of what I value in haiku to be embedded in other poetry I like, too.

What kinds of poems I enjoy writing seems to be in constant flux. I wrote hit and miss ‘free verse’ in youth, then nothing ‘creative’ at all for thirty years. The multiple demands of life happen! I began again this century with ‘free verse’ and a few freely interpreted set forms. It seems I absorbed Denise Levertov’s idea that each poem requires its own form, way back when, in youth. I’ve been encouraged by unanticipated success in publication of my ‘long’ poems in Australian journals and anthologies, as I have been with my haiku. Haiku seems to have taken over my writing life almost completely over the past few years and I find that it influences what little other verse I write these days, though that influence mightn’t be apparent to others.

The openness of wonder is something I value in others’ haiku. I’m not at all sure which of mine, if any, achieve this. That’s not for me to decide. Like many poets, I usually like best the most recent thing I’ve written. . . for a little while. Anyway, Curtis, here are three that I hope your readers will find worthwhile:


on a bare twig rain beads what light there is


If you've been enjoying this weekly series and have not contributed, please consider sharing your response (whether it be for haiku or tanka) to the three little questions that Lorin answered. You must be a published poet to participate.
Posted by Curtis Dunlap at 6:53 AM

I enjoyed your article very much, and your haiku (as you know). ;-)

all my very best,
Alan
With Words

What fine poems, Lorin. Thank you for sharing them. - Carlos

now this is a surprise. I was just about to send you another reminder too:-) girlfriend.

Nice stuff, non of which are my favorites, but I too really like
your (snail) poem.

bay shallows
a starfish moves its fingers
over mine

wow! Loved your haiku and I comletely agree that a poem ultimately finds it's own form :)

especially enjoyed the rusted hinge haiku. I can see the butterfly's wings moving ever so slowly!

Hi, Lorin, Thanks for your comments about the "nature" muse.
I always feel that poetry, any kind of poetry loses its power when it leaves reality. Right now I love your "rusty hinge" poem. I'm about to get started on drawings for the New Year and it's cold in here and my fingers have locked in. I can feel that haiku. It's real. Thanks for the butterfly.

Issa would be proud to have written this ku, Lorin - well done!