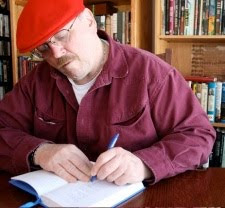 Harley holds a B.A. degree in English, a M.A. in the School of Hard Knocks and is working on a Ph.D. in the Survival of the Unknown Writer.

While Harley grew up in central Illinois, he has managed to visit forty-five states and has lived in five of them. He has been fortunate to step on the soil of Canada, Mexico, Jamaica and Venezuela. He is currently living in Ohio with his wife of over 35 years.

Harley King has been writing and publishing poetry for over 34 years. He spent 7 years writing only haiku. He has published 12 books of poetry and 2 works of non-fiction.

Harley has been speaking on leadership and customer service for over 20 years. He has delivered more than 4,000 presentations. For one nine year stretch, he averaged over 250 presentations a year.

I was first introduced to haiku in my freshman year of college (1967) when I read The Three Pillars of Zen by Philip Kapleau Roshi. During my college years, I carried a note book in which I jotted down my thoughts in haiku form. In 1975 when I began writing seriously, I focused exclusively on writing haiku. I wrote haiku initially because working full-time did not allow much time for writing. I spent seven years writing, reading and studying only haiku. In April 1976 my first haiku was published in Dragonfly:

tug at his collar


Since that publication I have had over 200 haiku published in over 25 magazines, newspapers and books including: Dragonfly, Modern Haiku, Bonsai, Outch, Cicada, Frogpond, Gusto, High/Coo, Leanfrog, and Wind Chimes. My haiku have been collected and published in three books: Winter Silence, Empty Playground and Mother, Don’t Lock Me in that Closet! My first haiku to be published in Modern Haiku (Winter/Spring 1978) was:

hand in hand with the woman —


Over 200 of my haiku including my reading of my first book, Winter Silence, can be found on my website: http://web.mac.com/hgking


Japanese Haiku Poets who have most influenced my haiku: Basho, Issa, Santoka Taneda.


After seven years of writing haiku, I created a seven-line poem that had its roots in haiku.

I started with three haiku (9 lines) strung together and shortened it over time to seven lines. In 1984 I wrote over 400 of these seven line poems. In 1999 I began writing long narrative story poems. In 2002 I began writing the long narrative poems in response to works of art. In 2006 I developed a 20 line poem. I still write in all four forms today.

pheasant scoots across the snow

If you've been enjoying this weekly series and have not contributed, please consider sharing your response (whether it be for haiku or tanka) to the three little questions that Harley answered. You must be a published poet to participate.
Posted by Curtis Dunlap at 5:41 AM

The bearded old man is such a perfect example of haiku! Thank you for sharing :)