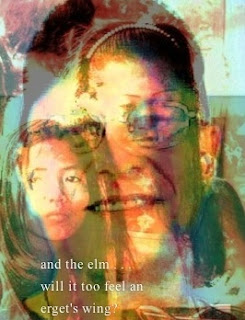 Wilson lives in the Philippines with his wife, Jinky, and step-son, Carlo. He writes:

"I won't bore you with a list of published poetry credits. You either like my art or you don't."

1) Why do you write haiku?
My father, the late Robert Dean Wilson, fell in love with haiku in the mid-fifties, impressed with it's minimalism and ability to use cerebral white space to say in a few words what others say with many words.

Even then, uninfluenced by Blyth, Henderson, Snyder, the Beats, or Yasuda, he saw the need to use less syllables yet adhere to the metrical schemata and kigo that defines true haiku. He did not think there were two kinds of haiku: one with one set of rules, the other with a different set of rules. To my father, haiku was a Japanese poetic genre. I agree with my father, and have stowed away in my desk, which I read through periodically, note cards with some of his handwritten haiku, each card, dated and signed.  When I compose haiku and tanka, for me it's a state of meditation. Nothing else exists...

Haiku is suggestive and cannot say all. Those that say all are not haiku. It is the haiku poet's job to write a haiku and the reader's job to interpret the poem according to his own cultural memories, education, experience, biospheric locale, and parental conditioning. Haiku as defined in most American textbooks is misinformed and mis-taught.  A haiku is not a nature poem nor a senryu labeled as a haiku. It's a poem that makes use of the said and the unsaid, utilizing highly effective aesthetic tools that cultivate each poem's gist and are, therefore, essential. There are those who argue that the use of said tools are not part of the Western mindset, but the use of these tools have benefitted many of America's finest poets including Amy Lowell, e. e. cummings, Jack Kerouac, James McClure, William Carlos Williams, Gary Snyder, Allen Ginsburg, and Ezra Pound. All of these tools can adapt to an American mindset, whatever the hell the American mindset is due to the diversity of cultures living there.

2) What other poetic forms do you enjoy?
I have a love affair with poetic meter. When I read a poem, it becomes a dance, the meter inhabiting me; my synaptic nerves feeeeeeeeeeeling every beat. I read almost all of Shakespeare's plays by the end of 6th grade. My father would explain each act, have me read, then read to me in a way that rang true and made the act embody the mood Shakespeare was conveying in that particular act. To this day I love to watch live stage performances of Shakespeare's play. My father also introduced me to Edwin Markham's poignant, stirring poetic warning to those who oppress the poor. It has perfect meter and I've performed it publicly several times. My favorite living poet is James McClure whom I've had the privilege of conversing with twice. He's a playwright, actor, and the best damned performing poet on the planet. His readings are usually accompanied by the piano artistry of the Door's former keyboardist, Ray Manzarek. As for the non-living, no one stirs me more than Agusti Bartra and William Blake, both masters of meter who knew the tools of their art, and penned poetry that will linger in my mind forever.


3) Of the many wonderful haiku you have written, what do you consider to be your top three?
I have no favorite. Like the late, great jazz trumpeter, Miles Davis, said regarding his own compositions, it's impossible to have a favorite when one's journey is forever changing. I don't want to be remembered for something past. I inhabit the now, not reiterating the past like once famous rock bands and vocalists. I study and write haiku and tanka daily. When one becomes satisfied with his art, he becomes a stagnant pond, evoking the conceptualization of algae, non-growth, and the lack of a need to create. Like a cubist, thinking in a Nietzsche-Picasso-esque influenced headspace, I believe we need to destroy in order to create. Satisfaction is the antithesis of growth and creative expression. I write my poetry expecting each one to be my best and settle for nothing less. I was exposed to haiku by my father in the late 1950's and my haiku has evolved daily, weekly, monthly, and annually. Life is metamorphic, in continuous change. I accept this and compose: thought and what is combined with the now, a canvas painted symbiotically between what was and is. I'll compose one now on the spot.  We'll call that my favorite:


Here are two others I just wrote:

leaving autumn . . .
a soiled blouse on the
evening news


If you've been enjoying this weekly series and have not contributed, please consider sharing your response (whether it be for haiku or tanka) to the three little questions that Robert answered. You must be a published poet to participate.
Posted by Curtis Dunlap at 7:24 AM

Curtis, I think this series is a wonderful idea. It gives us an inside view of a variety of poets. I'm well acquainted with Robert Wilson's work and own his book, so enjoyed this. Thanks again.

Would you like to answer those three little questions?

I am humbled and inspired by Robert's work.

really like that first haiku and this quote. "It's a poem that makes use of the said and the unsaid." I'm hoping to teach haibun as part of my cross-genres portion of intro to lit and I like thinking of haiku in that meditative way you describe :)

Robert, I am moved by your words about your father -- and envious of that rich relationship that helped shape the writer and artist you've become. There were no books in the home I grew up in until I started buying my own. Earning 35 cents per hour for babysitting, imagine how long it took to save for even one! Not only were you surrounded by great literature, but you were encouraged by a man who deeply appreciated it. Wow! Thanks for sharing.
--Billie

Thank you all for your kind
and supportive words.

tea leaves . . .
she woke up this morning
in two beds

Of all the times we've chatted and shared our thoughts on haiku, tanka and the like, this is the first time I heard the story about your father. Thank you for sharing that part of your life with all of us as well. It's inspirational and uplifting ...