This just in from Deborah P Kolodji:

If you have questions or would like more information, please contact Debbie Kolodji dkolodji@aol.com or Naia naia01@yahoo.com

I am writing to invite you to submit poem(s) for a "death" poem anthology that I am editing. By death poems, I am referring to haiku or tanka that are written with awareness of one's own mortality (not someone else's), and which may reflect what Yoel Hoffmann, in JAPANESE DEATH POEMS, refers to as the essence of one's spiritual legacy (however you define that).

I would be most obliged if you would be willing to post the call for submissions. I'm thinking that it might help to post an example poem:

that's what
dandelions do . . .
blow away

Thank you very much! And, I look forward to receiving a death poem... or more than one!


The February 2010 issue of LYNX: A Journal for Linking Poets is online at:


3LIGHTS Journal of Haiku & Related Forms : Winter 2010 has been published. Visit http://3lights.wordpress.com/ to access the new edition. Our featured poet for this debut edition is Michael Dylan Welch.

Submissions of haiku and related poems on a theme of 'music' are now being considered for our Spring edition. Details are at http://3lights.wordpress.com/submissions.

And finally, many of you probably saw the photo my daughter, Alana, took of me and last month's snowman, an event that turned into our first haiga collaboration. Alas, here are the remains of our beloved snowman, Billy Bobb, a name given to him by my very creative daughter. 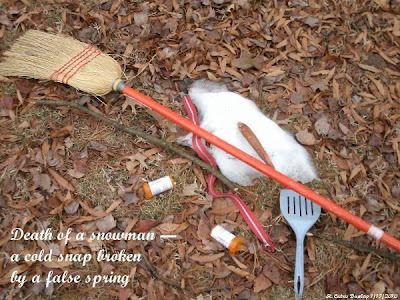 Posted by Curtis Dunlap at 9:54 AM