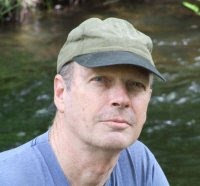 Michael L. Evans has been writing haiku since 1990, although he did not make his first publication submissions until 1997. His haiku have been published and/or received contest recognition in the U.S., Canada, England, Australia, Japan, Sweden, and Romania. His haiku have appeared in Frogpond, Modern Haiku, The Heron’s Nest, Hermitage, paper wasp, persimmon, RAW NerVZ, moonset, red moon anthology 2000 & 2002, 8th Mainichi Haiku Contest, the Basho 360th Anniversary Contest, and others.

I wrote poetry in High School- the usual depressing teen-age angst stuff. I then gave up writing for 30 years. In 1990, I decided to try poetry again. Knowing that my former attempts were verbose, I remembered a couple of Kerouac’s haiku from his novels I had read in the 60s, and decided to try them myself. I soon found myself addicted to them.

So, in the beginning, it was to restrain myself from again being verbose; later it was for the AHA moments that I realized through them- those sudden bursts of insight into universal connections. These days I very seldom sit down to write a haiku, being more involved in other forms – still, there are those times when a haiku presents itself, as a complete surprise, and I am always glad to have those moments.

For enjoyment, I read a variety of poets, in an ever expanding list: Langston Hughes, Lorca, Akhmatova, Yeats, Wallace Stevens, Paz, Borges, Neruda, Leonard Cohen, Bob Dylan, W.S. Merwin, Sandburg, Frost, Richard Brautigan, Pushkin, Yevtushenko, and Voznesensky – plus many of the Romantics. As for writing: these days, while I still write haiku, I write more American Cinquains, and tanka, with some rhymed and free verse.

3) Of the many wonderful haiku you’ve written, which do you consider to be your top three?

snow moon
the blue shadow
of a bare birch


I look forward to seeing many more fine poets & haiku in Tobacco Road.


If you've been enjoying this weekly series and have not contributed, please consider sharing your response (whether it be for haiku or tanka) to the three little questions that Michael answered. You must be a published poet in order to participate.

Rick Black will be our guest next week.
Posted by Curtis Dunlap at 6:54 AM

michael,
so nice to see you here at tobacco
road. loved your haiku!

"garden pond," has always been amongst my favorite haiku of yours.

I enjoyed your haiku story, Michael, and love your haiku. My favorite of the three you chose is "snow moon" - as beautifully bare as that birch, yet humming with a resonance that is absolutely stunning. It leaves me hungering for more of your work - so I hope haiku "present themselves" to you ever more frequently in the days and years ahead.

What a perfect way to start my day this has been!
Thank you!
Billie Wilson

Hello Michael .... I too have enjoyed very much your poetry, intelligent exploration and pithy observation. Gorgeous poetry here. I love all three; the moon one is beautiful - i see the shadow of the moon on the birch before the birch becomes the shadow ...

i really liked hearing how you came to try out haiku. all of the ones you presented are nice but i am a sucker for dandelions :)

.
They'll all great, but like Gene, I'm a fan of the "garden pond" haiku: it's full of sound, and not just the obvious sounds.

It's quite incredible that this eight word poem has so much in it.

A neat example of "negative space", because there is so much "unwritten" text around this poem.

Thanks for the nice comments - some individual respones:

Hi, Pamela - Long time, no talk!
Good to see you here too. Glad you liked the haiku.

Carlos - We have not talked before,
but I have read many of your fine haiku.

Gene - I know you like my "lunch with my ex ..." haiku, but was not aware you liked "garden pond" also -thanks for letting me know.

Billie - I was so glad to read your comments on "snow moon", because in my mind this haiku represents my writing coming full circle, i.e., haiku taught me to write w/o waste, which then made my other poetry less wordy, which then had the reverse effect of certain poetics finding their way into my haiku - in moderation, and when I think it not overdone.

Gina - I liked your comment and the fact that you saw more in the haiku than I did when I wrote it - in my mind, ALWAYS a good thing.

Alan - I was especially happy to see your comment on "garden pond".
You are the first person to mention the unwritten sounds of the haiku; ditto for your mention of the "negative space", which I think of as kin to the "white space" in so many Japanese paintings.