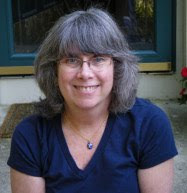 Cathy Drinkwater Better works as a newspaper editor and columnist, a children’s book author, and a freelance editor and writer. A widely published poet in a variety of genres, in recent years she has concentrated mostly on Asian forms including haiku, senryu, tanka, and haibun. She also enjoys combining her poems with art and photography in both traditional and modern haiga. Her poetry has been published in the U.S., Canada, and abroad since 1969, including three haiku chapbooks. Cathy has won numerous awards for both poetry and journalism, including prizes in the annual Robert Frost Poetry Festival Haiku Contest, the Zen Garden Haiku Contest, the Francine Porad Awards, and the Yellow Moon Competition; as well as First Place, Local Column/Humor or Features for the past four years running in the Maryland-Delaware-District of Columbia Press Association Editorial Contest. Long a student of many Asian traditions, Cathy holds a second-degree black belt in shorinji-ryu kenkokan karate and has achieved instructor-level in the martial art of t’ai chi ch’uan. Cathy and her husband, Doug Walker, live in Eldersburg, Maryland, USA, where they own and operate Black Cat Press, producing and publishing limited-edition collections of Asian-style poetry and art. They named the press after their black cat, Raven; Kiki, their long-haired calico, has never forgiven them.

Why not? But seriously, folks…. I write haiku because I’m a photographer. In a photo you try to capture a moment in time—a butterfly perched on a flower or a bee in mid-flight; a baby’s first smile or first steps; the perfect sunset over the water or a rodeo contestant airborne after being thrown from a bucking bronco—because those images take hold of our imagination or inspire some emotion in us that we don’t want to lose. We can hold onto the memory forever and share what it looked like with others through the medium of photography. A haiku is a word-photo: a flash, an instant, a moment in time that somehow grabbed us in mid-stride and wouldn’t let us go. We encapsulate the images of that moment forever in a few words that can be read in one breath. But the images of a haiku go deeper than dye on photo paper ever could. A haiku has layers that reveal themselves with each reading and rereading. If “a picture is worth a thousand words,” then I think a well done haiku might be worth ten thousand. It’s at least as much of a creative challenge to write a worthy haiku as it is to get “the perfect shot” with a camera—in part because the sound of the poem, the rhythm and pacing, whether read to oneself or aloud, has to be just right; but also because, in such a diminutive form, every single word, right down to an “a” or a “the,” makes such a huge difference to the success or failure of the poem. As Mark Twain wrote in his hilarious—yet utterly brilliant— essay, “The Literary Offenses of James Fenimore Cooper”: “An author should: [Rule 13] Use the right word, not its second cousin.”

I love to read and write tanka—they give you more wiggle-room than a haiku, and sometimes you want that. Sometimes what you need to say would spill over in a haiku but fits neatly into a tanka. I’ve been publishing poetry in various styles for 40 years—since I was a flower child. I’ve read and written free verse, blank verse, and prose poems. For several years I supplemented my income by writing humorous light verse for a local newspaper; and once I even penned a story for a children’s magazine entirely in limericks. But for at least eight years or so apparently I’ve somehow drifted to a place where I’m focusing almost exclusively on haiku and tanka (with a bit of traditional and photo haiga and some haibun thrown in now and then). These forms seem to be the perfect medium for whatever I find myself needing or wanting to express. I simply can’t see blathering on verse after obscure verse anymore when I can state my piece in three or five lines, in the least possible words. I was once asked in an interview whether my newspaper humor columns started out very long before I cut them down to the desired 600- to 700-word length. “No,” I replied quite seriously, “I begin with a punch-line…and then I pad.” With haiku and tanka, I don’t have to pad.

I don’t know about “top three,” but here are a few recent ones:


If you've been enjoying this weekly series and have not contributed, please consider sharing your response (whether it be for haiku or tanka) to the three little questions that Cathy answered. You must be a published poet in order to participate.

David Serjeant will be our guest next week.
Posted by Curtis Dunlap at 1:10 AM

cathy, so good to see you here at tobacco road! loved all your haiku.

What a delightful haiku, so simple looking and full of humour, yet so deep in layers after close reading, superb! ;-)

it is good to see you CAthy, and like Alan, I really love "those kids [again]"

Hi, Cathy, Great to see you here. Would you sprinkle a little tanka dust over my head? A lot of deadlines coming up...your tanka always so playful.
Thanks, Merrill

Great series this - what a great way to learn others approaches to the art. Much appreciated.

Also - my name is Dick Whyte and I tried to send you email earlier today. I just wanted to make sure it got through (cause it was hard to tell on the form).

All the best,
Dick Whyte