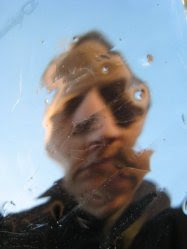 David Serjeant lives in the UK. He was introduced to haiku at school in the 1980s. His passion for haiku re-ignited when he treated himself to Cor van den Heuvel's Haiku Anthology at the turn of the millennium. He has since been published in Blithe Spirit, Presence, Simply Haiku, The Heron's Nest and Shamrock amongst others.

His blog "Distant Lightning" is at http://distantlightning.blogspot.com

I like the portability of the form. I have at least one small notebook with me everywhere I go that could potentially contain a hundred haiku or proto-haiku along with notes and observations. A few spare seconds of flicking through can reveal nuances and developments that I hadn't previously considered. I guess I enjoy whittling and crafting something so concentrated and the fact that some haiku jump out immediately, while others need some care before they reveal themselves. I often observe things and think "there's a haiku in that" but may not feel capable of expressing what I need to express until months or even years later.

I used to obsessively keep a journal, but the urge to do this has ebbed over time. Also as a geology graduate, I can't help but collect stones from the places I visit. I see haiku-writing as a continuation of these processes. It anchors me in a particular moment, pretty much in the same way as holding a lump of basalt can take me back twenty years to a remote Scottish island.

Illness has meant that I sometimes have a limited attention span, so because of this, I tend to veer toward short forms.

I have on occasion dabbled in concrete poetry and I get a tremendous kick out of seeing this done well.

I recently acquired a book by the land-artist Andy Goldsworthy and was struck how the captions of his photographs were almost haiku-like in themselves. The photographs of intertwined leaves or dust flung into the air also seemed to share common qualities with the poetry I admire.

I like to think that poetry is inherent in most things I see or hear and the mark of a good poet is someone who can unlock the rhythms of the world in whatever form they can manage even if no words are involved.

no easy task this - if you ask me again tomorrow I would undoubtedly pick a different three:

dusting the corners -
the curl of legs
on a spider husk

... and one very personal piece:


new year's eve
the bowl slips from my fingers
...smashes

I have been enjoying this series immensely. Thank you Curtis for giving me the opportunity to share some time on Tobacco Road.

If you've been enjoying this weekly series and have not contributed, please consider sharing your response (whether it be for haiku or tanka) to the three little questions that David answered. You must be a published poet in order to participate.

David Grayson will be our guest next week.
Posted by Curtis Dunlap at 5:54 AM

hey, david, i would like to see
a real photo of you.

But if you want to see one or two other photos, they are easy to find. :-) Though this one resonates with me.

I guess you mean a photo without a sheet of ice between the camera and myself. There is a clearer profile shot of me on my distant lightning blog if this helps.

I considered a number of photos for this article but I like the way this one distorts my image.

I could also say something along the lines of wearing nature as a mask, but I fear I will be treading a fine line into pretentiousness if I do.

...plus the other ones made me look like a miserable git.