Peter Vernon Quenter has studied with and had exposure to various teachers and Brush Calligraphy Masters: Tomoko Kodama Sensei, Ottawa; Kobun Chino Roshi and Kanjuro Shibata Sensei (Kyudo Master and Calligrapher) from Japan; Barbara Basch in the Lineage of Tibetan Buddhist Master Choegyam Trungpa Rinpoche; and Fumiko Uyenaka Sensei. He has conducted courses at the Visual Arts Centre Orleans; the studio of au Papier Japonais, Montreal; Yamada Art Studio, Montreal; Shambhala Centre, Montreal; St. Moritz Public Art School, Switzerland; Stepping Stones Art Gallery, Ottawa; Art Lending of Ottawa. His group shows include The Japanese Embassy, and arts festivals in Ottawa and Montreal. In 2007 he won a first place award of excellence in the Commemorative Haiga Contest for the World Haiku association. Peter is also certified in classical Homoeopathy, Herbology, Nutrition, Iridology, Reflexology; in 1993 he passed the board examination for the National Certification in Therapeutic Massage and Bodywork in the USA. He has been practicing and teaching classical Homoeopathy and Natural Health in Ottawa and across Canada from 1990 to 2005. He currently provides Natural Health guidance to customers at Mother Earth Natural Health in Ottawa, while focusing on the practice and creation of Arts as a skillful means for Mindful Living.

Click on the thumbnail to see a larger image. 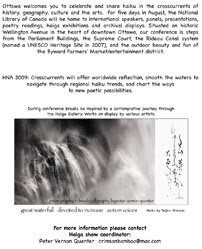 Email ThisBlogThis!Share to TwitterShare to FacebookShare to Pinterest
Labels: Haiga