Alexis Rotella has a new book: 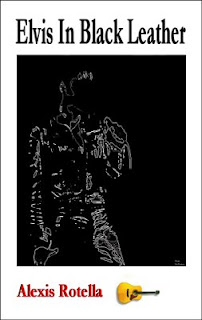 “Alexis Rotella, with an expected mastery of insight and craft, opens a window into a young girl’s heart in these 28 kinetic portraits of revisited longing, desire and dream inspired by the Pied Piper of an era gone, yet permanently etched on the American mind-scape. Skeptical of celebrity inspired literature, all I can say is: I read it. I loved it. Elvis in Black Leather —nothing like it before in tanka. You’ll be surprised. Trust me.” —Larry Kimmel, Editor of Winfred Press

In these poetic encounters Alexis Rotella brings legend and reason together, showing us the emotional logic from which “gods” are made. These poems are not elegies. They are deliciously alive. —Grace Cavalieri, Producer/host “The Poet and the Poem from the Library of Congress”

“This is the most enjoyable collection of tanka I’ve read in a long time. What I like about it (along with, it shouldn’t need saying, the quality of this poet’s writing) is the way Alexis Rotella is pushing the boundaries of the genre, so they are not only linked to a common theme —a remembrance of Elvis —but also breaking into the realms of reportage and biography and away from the frequently genteel constraints of traditional tanka.” —Charles Christian, editor Ink, Sweat & Tears

“I have read Alexis Rotella’s Elvis in Black Leather five times with increasing pleasure, a number of the tanka having her brand of direct, down-to-earth humor. Mostly tanka, her poems resound with allusions to Presley’s textured clothing, to his songs, to his fast-food delights, and to her own dreams about him. One poem satirizes her father who objected to continually hearing Elvis on the radio—her father said he himself was King in his own home. Among the most moving of the poems is one on Presley’s death: ‘Mourning doves / how sweet / the sound — / vigil over / at Graceland.’ Alexis’s chapbook is a black-leather gem.” —Sanford Goldstein, renowned poet, translator, and author of Four Decades on My Tanka Road
Posted by Curtis Dunlap at 6:23 AM

Email ThisBlogThis!Share to TwitterShare to FacebookShare to Pinterest
Labels: Publications