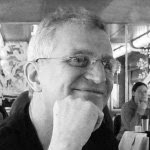 Dave Russo's haiku have appeared in Simply Haiku, Frogpond, Modern Haiku, Acorn, and other journals. He is included in big sky: The Red Moon Anthology 2006 and the 2007 New Resonance anthology (Red Moon Press). He is the Webmaster for Haiku North America, the North Carolina Haiku Society, and Red Moon Press. He was one of the local organizers for Haiku North America 2007. Dave won the head-to-head haiku slam competition held at that conference.

About 10 years ago, a friend gave me a copy of Robert Hass's Essential Haiku, versions of Basho, Buson, and Issa. This book swept away my assumptions about what haiku are and what they can express. It made me want to write poems that sounded like the poems in this book.

Yet, I was reluctant to write haiku because I had such a bad impression of haiku in English. Any haiku that I might have read by Gary Snyder or Jack Kerouac were drowned in a tsunami of pop-culture haiku about cats, spam, rednecks, and the like. Haiku in English seemed to be a kind of limerick, a verse form that was completely defined by the 5-7-5 syllable pattern, a kind of poetry game suitable only for popular contests and arts programs for kids.

Luckily, however, I happened to go to a literary festival where I heard Lenard D. Moore read his haiku and other poetry. It was clear that for Lenard, haiku were poems: not experiments with an exotic form; not trifles dashed off between stints of real work. They were American, yet they had an unmistakable family resemblance to the Japanese haiku I had read in translation. I think I started writing haiku in earnest after that.

I’m not the sort of person who wakes up in the morning and says, "I think I’ll write a sijo today. Or maybe a ghazal." But if I take "forms" to mean "kinds", I can say that I like many kinds of poetry, from many ages and many parts of the world.

I must confess that I have not yet made peace with renku. Renku sessions, with their rules, socializing, multiple sources of advice, shifts of perspective—and the pressure to write something while your partners are waiting—are quite confusing for an introvert like me. On the other hand I really enjoyed the small renku session we had with Paul MacNeil when he came for Haiku Holiday some years ago, so maybe there is hope for me yet.

Hmm. Well, excuse me for 100 years while I go and try to write some wonderful haiku! In the meantime here are some one-liners. I’d like to write more of these.

roasting a rattlesnake we talk about girls


Angelee Deodhar shares her response to Haiku - Three Questions with us next week.
Posted by Curtis Dunlap at 2:07 AM