The new Sketchbook Issue 41 is now on-line. The March / April 2012 Sketchbook contains poems, art and features by one hundred-four writers from twenty-one Countries.

From the Editor's Chairs:
http://poetrywriting.org/Sketchbook7-2MarApr2012-41/Sketchbook_7-2_MarApr_2012_From_The_Editor_s_Chair.htm

The editors are now accepting submissions until June 20, 2012 for the next issue: submissions@poetrywriting.org

Karina Klesko, US and John Daleiden, US
jd

Hiroaki Sato sent this to me — it might be of interest to you for your haiku services.

Would you send this to those who might be interested? I am the judge of the English division

Could you put out a reminder about the 2012 Tokutomi Haiku Contest.  The deadline is coming up - it's May 31st, and I really haven't received a lot of entries so far.

This is a 5-7-5 contest, using only one kigo.  These rules were set in honor of the founders of the Yuki Teikei Society, Kiyoshi and Kyoko Tokutomi.

The Tokutomis founded the Yuki Teikei Haiku Society in San Jose, California, in 1975. Their vision was to nourish and foster the art of writing haiku in English using the traditional guidelines developed by haiku poets in Japan. As explained by Mrs. Tokutomi, in Japanese "Yu" means "having", "Ki" means "season", "Tei" means formal", and "Kei" means "pattern".

Therefore in the founders' view, "yuki teikei" haiku contains a season word and utilizes a three-line 5-7-5 pattern of syllables. In today's world, literary English language haiku is usually shorter than 5-7-5 syllables, even by members of the Yuki Teikei Society, however this contest continues to honor the vision of the founders of the society.


Take Five : Best Contemporary Tanka, the anthology series founded by tanka poet and editor, M. Kei, has announced the publication of Volume Four. Now on sale, it features 260 pages with the largest selection yet of tanka poetry and related forms, making it the single largest volume in the series. It retails for $18.00, and can be bought direct from the printer at CreateSpace.com, or through Amazon.com and other online retailers.

Buy link: https://www.createspace.com/3785119 -- also available from Amazon.com and other retailers.

A gift haiku book from Damir Janjalija sent to you by his permission.

Hope you will like.
A paper edition will be printed soon.


Poets are invited to submit their work to a new Atlas Poetica Special Feature on LGBT Tanka.

The title Chiaroscuro is a veiled reference to Torikaebaya Monogatari (literal translation: ‘If only I could exchange them’ story) written around the 12th century in Japan by Anonymous (man or woman, to this day, we do not know). The story, graced with approximately 80 tanka (in the French version), has been translated into English by Rosette F. Willig in 1983 as The Changelings; into German by Michael Stein in 1994 as Die vertauschten Geschwister (lit. ‘The exchanged siblings’) and into French by Renée Garde in 2009 as Si on les échangeait. Le Genji travesti.

Torikaebaya is the tale of a sister and a brother whose mannerisms are those of the opposite sex. Their father, exasperated, decides to present them to the Imperial Court in the sexual identity of their choice; both siblings pursue fabulous careers. The Author touches many themes in this novel: not only are Lesbianism, Gayness, Bisexuality, Transgender tackled but Androgyny as well. The notion of ‘gender’ is played with humour and psychological insight: one might ask, did writers such as Balzac with Séraphîta and Virginia Woolf with Orlando know about Torikaebaya?

The whole book is ‘chiaroscuro’: whether it shows, at times, the emotional distress of the heroine as a divine nobleman; whether it portrays the shy brother as a lady confidant or ultimately, the lover of the Emperor’s naïve daughter; whether it relates to meetings of lovers between dusk and dawn. To learn more about this novel (characters, themes, authorship, translations), please click the links below: in English (http://en.wikipedia.org/wiki/Torikaebaya_Monogatari); in French (http://inalcocej.free.fr/textes-en-ligne/Torikaebaya-fr.rtf). One might also wish to enjoy M. Kei' s review of the book: http://bookworld.editme.com/REVIEW-THE-CHANGELINGS-A-CLASSICAL-JAPANESE-COURT-TALE

You are invited to enter 3-5 tanka. Your five-line poems (no capitalisation, little punctuation) are to be included in the body of the email, without attachments. The tanka, submission open to everyone, should have a positive outlook on LGBT. Poems submitted must be previously unpublished and not under consideration elsewhere. The Editor will accept a pseudonym for poets who prefer to remain anonymous. Complete ATPO guidelines and previous Special Features may be viewed at Atlas.Poetica.org.

Your name, country, email address should be included in the email. Please, do include a bio sketch (75 words max.). Contributions should be emailed to Editor Janick BELLEAU at janick_belleauATyahooDOTca (there is an underbar between the first and last names), the Subject line being “ATPO Special Feature submission - LGBT Tanka”.

25 successful contributors will have a single poem published OR 25 selected tanka will be included when Chiaroscuro - LGBT Tanka appears as an Atlas Poetica Special Feature in September 2012.

Thank you in advance for your submission.


an'ya sent this poster about the Second Friday Art Walk Exhibit. Click the image for a better view. 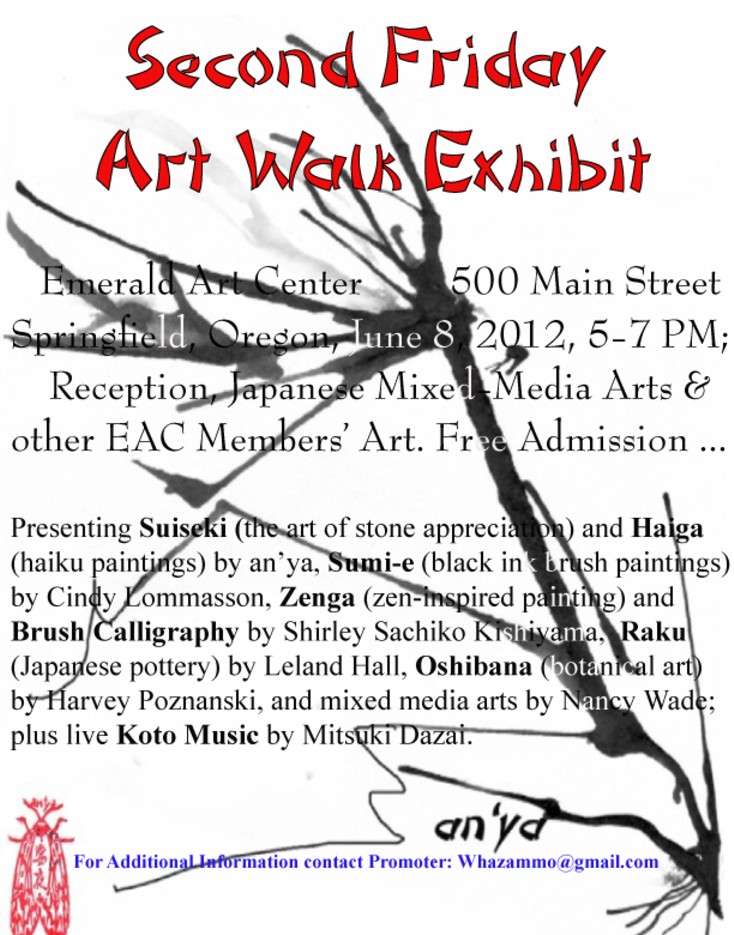