I wanted to let everyone know the latest news at Turtle Light Press. We have just selected the winner of the 2010 haiku chapbook competition -- All That Remains by Catherine J.S. Lee. Unlike Michael McClintock, a veteran haiku poet who won the first competition, Lee is a relative newcomer to haiku. She has been writing haiku for two years but exhibits an evocative, mature voice. You can take a look at this link,

...to read the full award statement and sample some of Lee's moving poems. TLP is planning to release All That Remains this coming fall.

We had a lot of wonderful entries from several countries around the world and one in particular, Wing on Wing by Kathleen O'Toole, was given an Honorable Mention. I judged the contest again with Jamaican poet and writer Kwame Dawes.

Also, please let folks know that McClintock's Sketches from the San Joaquin, which took first prize in the initial TLP haiku chapbook competition, is now available through our website and we are working on a limited edition that will contain sketches based on photos of the valley taken by photojournalist Dorothea Lange. The book itself will open from two sides inward, giving readers a sense of entering the valley and discovering poems along the way. A publication date for the limited edition has not yet been set but I will let you know.


I'm proud to say that Angelee Deodhar and yours truly are collaborators of a haiga. Angelee was inspired to pen a haiku to one of the pictures I took of a tree that had fallen during the recent ice storm in North Carolina. 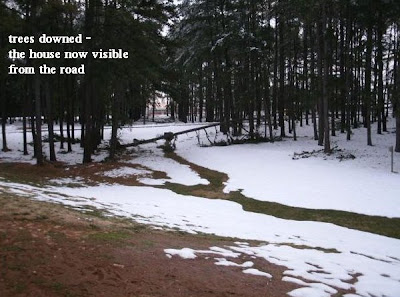 Beginning tomorrow, five of my poems (a poem per day) will be featured on Shreve Memorial Library's Electronic Poetry Network. They will run all day (or all weekend) long on an electronic message board at the Main Library in Shreveport, Louisiana. They will also appear on the EPN library's web site:

Thank you Carlos!
Posted by Curtis Dunlap at 6:35 AM

The link should be http://www.shreve-lib.org/poemofday.htm (change the underscore to a hyphen).

Also nice to see another library involved with haiku as well! ;-)

Curtis, congrats on the week of Shreve Library poems ... Carlos does a fine job ...