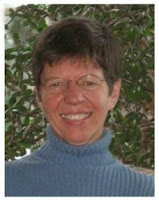 Susan Constable began writing haiku in 2006. Since then, she’s tried her hand at  haiga, haibun, and tanka. Her work has been published in over 30 journals as well as numerous anthologies including Montage: The Book, New Resonance 6, several Red Moon anthologies, and 57 Damn Good Haiku by Some of Our Friends. She enjoys chocolate on a daily basis, has learned to say no, never dyed her hair, and lives by the work motto: It’s not perfect, but better than it was. Susan lives with her husband on Vancouver Island, off the west coast of Canada.

Mainly because I enjoy it. As soon as it stops being fun, I’ll move on to something else. In the meantime, I write at least one a day, no matter how bad it is . . . going by the philosophy that to write one good haiku, one must write a hundred bad ones. Writing haiku provides a wonderful incentive to observe nature (both human and otherwise) and to marvel at the intricacies of the world around us. I also write for the connection made with poets through reading and commenting on each other’s haiku and, to be honest, for the satisfaction of getting my work published.

As I get older, my attention span seems to be shrinking so anything short is more likely to get my vote these days. Although I began by writing fixed forms, then free verse, all my writing now (and most of my poetry reading) is of haiku, tanka, and the occasional haibun. I thoroughly enjoy creating haiga and I’ve begun to dabble in some of the Japanese linked forms, but it’s still a bit of a struggle with anything longer than 12 verses.

3)  Of the many wonderful haiku you've written, what do you consider to be your top three?

What an impossible question! I have no idea what wonderful means, in this context, and doubt that I’ve written any such thing. However, here are three that I still like, even though they were published several years ago.


amber light
the time it takes
a leaf to fall


no moon . . .
the sound of leaves
catching rain


I’ve enjoyed your blog for quite some time, so it’s an added pleasure to share a few thoughts with you, along with some of my haiku. Thanks so much, Curtis, for all the time you spend on Tobacco Road, which is such a benefit to the haiku community.

If you've been enjoying this series and have not contributed, please consider sharing your response - whether it be for haiku or tanka - to the three questions that Susan answered. You must be a published poet to participate.
Posted by Curtis Dunlap at 9:46 AM

Susan, how glad I am that you have come to writing haiku. You are an excellent writer and your skills seem to have found the perfect home in the Japanese genres. So glad to find out you write one every day. Such a good practice. Blessed be! \o/ Jane

Hi, Susan! What a delight to read your responses here. And the three haiku you chose are gems, each with a little special something to give it depth and make it memorable. I'll second Jane's blessings! Hannah

Susan, I so much enjoyed your posts on Mann Library's Daily Haiku. Every morning I began my day with you and although we have never met, haiku allows me to have the honor of sharing your life and your company. Many thanks, Merrill

Thank you, Jane. If it weren't for a friend's urging to enter The Vancouver Cherry Blossom Festival Haiku Contest in 2006 and your article, Haiku Techniques, I wouldn't be addicted to haiku. But what a lovely addiction!

Ah, Hannah. Lovely to read your kind words. Thank you.

I know you through your haiku, Merrill, and have been enjoying your work through Blogging Along Tobacco Road this month. Thanks so much.

Susan, my friend, all your words are words of wisdom. And your poems remind me what "wonderful" means.

Thanks so much, Bill. Your comment and friendship are appreciated.