I apologize for the small hiatus. My daughter, Alana, and I moved recently. We're still located in the little old southern town of Mayodan, North Carolina. I know it may sound a bit cliché but there truly is no place like home.

I'd like to thank everyone, near and far, who have helped and supported me during this transition. Sometimes you have no idea just how large your family can be until you need someone to talk to or a shoulder to lean on. I am forever indebted to you all.

BTW, Alana recently contributed to Paw Prints, her school newspaper. Chapter one of Alana's story entitled Black, White, and Gold appears on page seven of the September issue of Paw Prints. Yes, I'm a proud father of a remarkable 12 year-old.

I no longer do reviews on Tobacco Road. Frankly, I don't have time. However, occasionally I receive a book from someone that is so captivating that I am compelled to spread the news. Tidepools: Haiku on Gabriola is such a book. Edited by Michael Dylan Welch, Tidepools is is a splendid book of haiku, senryu, haibun, rengay (and more) by poets who gather annually at the home of Naomi Beth Wakan on Gabriola Island, British Columbia. This book is more than an anthology of spectacular poems: It is also a guideline as to how haiku gatherings should be conducted, in an air of mutual respect, teaching and learning. Participating poets pay tribute to Gabriola Island in Tidepools with their poems:


Silva Bay
watersplash from the tips
of a toddler's toes


pale and wet
drips the winter moon
from the painter's brush

Naomi Beth Wakan's free verse poem,  How to Write a Haiku, on page 26 is instructional and fabulous!

I hope I can find my way to Gabriola Island someday. Until then, I'll read and reread this remarkable book. 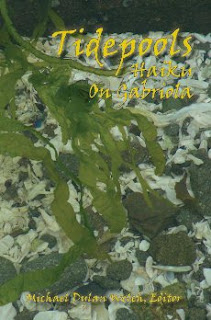 Congratulations on your move, Curtis, and thanks for the review. I'm not going to buy now since I'm a towering stack of books behind on my reading but it's definitely going on my 'to buy' list for later. It looks great!

Also I'm guilty of stretching Pris's budget as I've just recommended a load of must have books. ;-)

This book does look good so I'm sure a few of us will either buy now or think of Christmas.

Any book edited by MDW is a book that will be vital for any haiku writer's library.

Thanks for the kind and unexpected words about Tidepools, Curtis. The book contains work by more than 40 contributors, including Sonja Arntzen, Winona Baker, Allan Brown, Susan Constable, Alice Frampton, Christopher Herold, Jim Kacian, Carole MacRury, Vicki McCullough, Tanya McDonald, Naia, Richard R. Powell, Jim Swift, Ursula Vaira, Naomi Beth Wakan, and me. Tidepools features a mix of haiku and senryu, a kasen renku, several rengay, several haibun (mostly about Gabriola or our haiku weekends there), a couple of longer poems, an extensive interview with Naomi Beth Wakan, and notes on each of the forms used in the book. You can read my introduction to the book at http://sites.google.com/site/graceguts/essays/eunoia-beautiful-thinking-on-gabriola (this page also provides other information about the book, including back-cover blurbs).

Thanks, too, Alan, for your kind words.