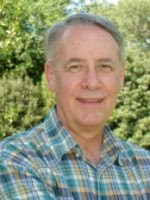 Bill Ramsey's new haiku book, More Wine, is now available from Red Moon Press. Warning: this book may be hazardous to postmodern angst. Its back cover states: "Haiku long has relished the quietistic impulse. Ecstatic verse has favored dramatic exuberance. These two traditions are stirred into a global mix in More Wine. Wine, an old symbol of human thirst for an intimate Beloved, here pours through yearnings of our postmodern sensibility."

I write to pay attention to the internal self, to sustain an integrated life, and to record my 8 inches of snail’s progress toward the Divine.

I've heard of the deep spiritual profundity to be found in limericks; however, I have not yet found it there. So I read Rumi, Hafiz, Rabia, and Kabir.

on a Rwandan road

as i eat shrimp

born to live i hoe

and, ah, born to die

i kiss the melon

against a vast night--

my turn to go

If you've been enjoying this weekly series and have not contributed, please consider sharing your response (whether it be for haiku or tanka) to the three little questions that Bill answered. You must be a published poet to participate.
Posted by Curtis Dunlap at 7:16 AM

I really appreciate the haiku. They are very fresh, immediate, and a welcome style.

Glad to hear you read Kabir!

I don't think everything has been translated in Hindi (and English) from Sanskrit yet, as he continues to "startle and confront us" us even in today's world.

Bill, Your "forking compost/ raising all the dead/ to wincing light" in the current issue of Frogpond reminds me what I have to do once the snow is gone around here...raise the dead! I always enjoy your haiku... serendipity along the way. Many thanks. Merrill

"to record my 8 inches of snail’s progress toward the Divine."

I think there may be a haiku there, Bill!