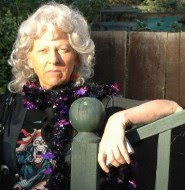 J. Zimmerman's poems have been published internationally (including Australia and Germany). She is co-editor & contributor for "Poetry at Ariadne's Web". She wrote her first haiku by accident, by chopping away the non-essential from longer poems. Currently she lives along the west coast of North America. She is practicing ukulele and to be a Halloween Biker Granny.


1) Why do you write haiku and tanka?

Haiku to savor a moment.

Tanka to reflect on a lifetime.

Both haiku and tanka to preserve and share this dewdrop world.

For a few decades I have studied and written in various traditional forms and their modern and international adaptations: my current favorite poem is John Yau's "Chinese Villanelle". I was finally able to appreciate and write tanka two years ago, after tanka poet Mariko Kitakubo's presentation at Asilomar (2007 YT Retreat) let me hear the sound of tanka.


3) Of the haiku you've written, what do you consider to be your top three?

The first of my current favorites happened because I was returning very late from the beach to continue a kigo workshop with my haiku mentor, Patricia J. Machmiller: I had no time to put on my shoes ...


Second is this one where I was experimenting with the "inner landscape" technique that I first saw in the haiku of Fay Aoyagi; I like its blending of a tanka sensibility into a haiku:


Sunset and moonrise --
if only I could learn
to be faithful


Thirdly, this was one of my few attempts at a one-line haiku:

I know you only want 3 haiku, but this is my life-long favorite as it was my first "real" haiku and was voted "top of the pops" in the kukai vote of the January 1996 Geppo:


waiting for moonrise
the man on the yellow cart
whistles Puccini

If you've been enjoying this weekly series and have not contributed, please consider sharing your response (whether it be for haiku or tanka) to the three little questions that J answered. You must be a published poet to participate.
Posted by Curtis Dunlap at 7:50 AM

Your Puccini poem certainly is "top of the pops." - Carlos Colon