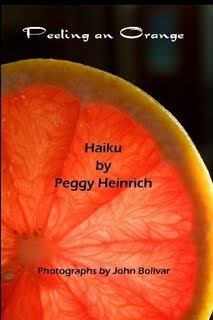 “January sunset / putting aside her journal / to peel an orange”
Offering a modern approach to haiga, the juxtaposition of haiku and art work, Peeling an Orange combines poet Peggy Heinrich’s exquisite haiku with botanist/photographer John Bolivar’s stunning black-and-white photographs. Both poems and photographs carry the reader through the seasons of a life as well as the seasons of the year to produce an effect that is more than the sum of its parts.

Heinrich's award-winning work has been described, according to one editor, as always finely rendered and thought through. The final haiku in Peeling an Orange, “around the fire / the widening circle / of silence,” was cited by noted artist and teacher Kaji Aso as “an original, neither a second-hand Basho nor Buson, [in which] a basic sense of human life and warmth of heart is well captured.”

A runner-up in the Nikon International Photo Contest, John Bolivar has won many awards and is currently working on a book of his garden photography. His work has graced the ads of many commercial clients including Patagonia, UPS, REI plus Outside, National Geographic, Sierra and many other magazines.
_________________________________
“Poet Peggy Heinrich is an insightful and empathetic companion as she invites the reader to travel with her through the seasons of haiku. Her poems are marked by intricate layers of juxtaposition: city and country, sun and rain, solitude and company, humor and poignancy, and above all a deep appreciation of the present steeped in the remembrance of things past. Peeling an Orange is like an enso, offering the reader a complete journey from the ripples in a spring pond to deep winter’s ‘widening circle/of silence’.”

— Pamela Miller Ness, Past President, Haiku Society of America
“The poems in Peeling an Orange can only be written by a master poet and Peggy Heinrich is one. This book captivates the reader with its haiku & senryu, and just when you think that it can’t get any better, it does. Over the years I’ve thinned out my bookshelves, but this book is a keeper and it is wonderful to have a collection of such work in a single volume.”


This just in from Jörgen Johansson:

Found a pile of my MUD ON THE WALL chapbook which i had forgotten i had left "Selected Haiku, Senryu & Tanka poems of Jörgen Johansson"

Kinda thick(44 pages) and gives a good perspective on where i stand 'ku etc wise.

So here's the deal, get in touch with me and i will send a copy for FREE, great eh?

If u want it signed, just let me know.

So throw yourself on the comp. keybord and w R i T e soon!

A review of JJ's book of poems is available on this page:


tinywords: a journal of micropoetry is returning and is currently accepting submissions. More information is available on this page.


Deborah P Kolodji sent this journal entry (with photos) of a Ginko Walk at Bolsa Chica.


Red Moon Press has several new releases. You may recall that two books were mentioned in an earlier post. Visit...

Expect a follow-up in reference to A New Resonance 6: Emerging Voices in English-Language Haiku, edited by Jim Kacian and Dee Evetts, soon.


An finally, if you have not subscribed to moonset, you are missing one of the best journals of Japanese short-form poetry. The editors have their fingers on the global pulse of what is going on in haibun, haiga, haiku, tanka etc.

More about this remarkable journal soon.
Posted by Curtis Dunlap at 6:48 AM