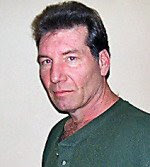 H. Gene Murtha, a naturalist and poet, was born on October 19, 1955 under the sign of Libra in Philadelphia, Pa. He has won or placed high in a number of haikai contest around the world. Gene sponsored and judged the first haiku contest for the inner city children of Camden, NJ., for the Virgilio Group, of which he is an lifetime member. With renku partners Bill (Wm. J.) Higginson and Paul MacNeil, he is co-inventor of the single-words shisan renku entitled, Cobweb. His memberships include the Pennsylvania Poetry Society, Mad Poets Society, The Haiku Society of America, and the Nick Virgilio Haiku Association.

I would love to answer this query the same way that Hortensia Anderson did, but I won't. Honestly, I am not sure. Being a Naturalist, it is natural that the flora and fauna leaks into my poetry regardless of form and/or genre. I have been writing since the late 80s with some success, although, I never thought a lot of haiku until 1999, when two poets started posting haiku at one of my old free form poetry Yahoo Clubs. I gave up writing haiku twice between 1999 and 2001, and I probably only stuck with haiku, because I could not write a three line poem that resonated.

2) What other poetic forms do your enjoy?

Performance poetry is were I started; spoken word, then I started writing free form after a couple of fans wanted to read my poetry in print. I am a huge Beat Poet fan. Gary Snyder is my favorite poet, along with Allen Ginsberg. My interest in both tanka and haibun stated in 2001, although, I do enjoy writing linked verse, such as: rengay, tan renga, renku, etc., along with haiku.

Oh, I hope that I have not written my best haiku, but these are a couple of my best noted poems:


spring mist –
a mallard paddles
through our stillborn's ashes

The Heron's Nest vol.6, 2006 and was included within the Special Mentions section for the year.

summer haze
a crow flaps free
of the asphalt


Thank you for this opportunity to gather and share my thoughts on haiku, Curtis. And thanks for your important Three Questions project here on Tobacco Road.


If you've been enjoying this weekly series and have not contributed, please consider sharing your response - whether it be for haiku or tanka - to the three little questions that Gene answered. You must be a published poet in order to participate.

Deborah P. Kolodji will be our guest next week.
Posted by Curtis Dunlap at 7:05 AM

These are really tight haiku. Each one has a power of its own, and are very inspiring despite the tough issues mentioned in at least two of them.

HI Gene,
I really admire the way you have used
personal loss to make poems that have a universal reach. 'fishing' is enormously moving to me.
Karen Klein

hi Merrill! Alan it's always a pleasure and you have been an inspiration to me since 2002, speaking of which. Karen! you were the first person to greet me at an HSA meeting, Wilm., Del., I believe and you introduced me to everyone within the room. The next time that I see you, who knows. maybe Alan Summers will be with me? Thank you for stopping by and sharing your thoughts.

What you day always works for me Gene. Your gems are always honed to perfection.