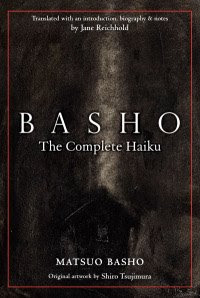 
My haiku journey has been one of cultivating a growing awareness of my surroundings. Through study, trial, and error, I have learned to preserve moments in my life and, occasionally, share them through haiku. I likely would have ignored such opportunities for composing poems had I not studied the works of other poets. I have had the pleasure of meeting and talking with a number of people who have inspired me through their friendship, advice, and poems. Such encounters have always fueled my haiku engine.

Unfortunately, we cannot converse with the original masters of haiku, but we can be inspired by their poems, journals, and the books written about them. Basho: The Complete Haiku, a new book published by Kodansha International with an introduction, biographical notes, and translations by author and poet, Jane Reichhold, explores the life and 1,012 known poems of the father of haiku, Matsuo Basho (1644-1694).

My first and long-lasting impression of this book is that Reichhold has worked diligently to retain the essence of each poem in her translations, occasionally offering multiple interpretations in each chapter along with the literal translations, Romanized versions, and original Japanese for every poem in the Notes section.

Here are a couple of examples:

here and there
a mask by itself combs
willow hair

a spring wind
combs on a mask
willow hair

And one of my favorite poems from this volume referencing the poet Saigyo with an introductory sentence by Basho written in the autumn of 1684:

A stream flows through the bottom of Saigyo Valley, where I wrote a poem about women washing yams.

The commentary included with the Romanized and Japanese versions of all 1,012 poems is invaluable, giving the reader a better understanding of what inspired Master Basho to write each poem, his poetic sensibilities, and his keen haiku eye.

The chronological order of this book is especially appealing, from introduction to chapter-by-chapter biographical synopsis, followed by poems written by Basho during that phase of his life gives the reader a sense that they are accompanying this revered poet on his haiku journey. The selected chronological notes and glossary of Japanese literary terms in the back of the book are perfect for quick referencing.

Reichhold could have finished Basho: The Complete Haiku with the translations and biographical notes and had a successful book, but she goes the extra mile, reaching out to the serious student of haiku by including an Appendix with 33 techniques in composing haiku including such important topics as sabi, wabi, yugen, and karumi. Each technique is explained and expertly demonstrated with one of Basho's poems.

Shiro Tsujimura's illustrations, interspersed throughout the book, complement this volume nicely. The dusk jacket photo by Shuhei Fujita of a representation of Basho's hut is quite appealing to the eye, perhaps giving the peruser the feeling that he or she is holding a piece of history. It is the opinion of this humble haijin that this book by Kodansha International and Reichhold is of tremendous literary and historical significance and should be included in every haiku poet's library. Basho: The Complete Haiku is an indispensable resource for any serious student of the father of haiku.
Posted by Curtis Dunlap at 11:44 AM

Beautiful review, Curtis, and right on the money. This gives everyone the details they need to know about this wonderful book.

You are welcome, Don.

Basho: The Complete Haiku is a remarkable book. I thoroughly enjoyed reading and reviewing it.

waiting for my copy to arrive tomorrow
john

Must get a copy of this book. Along with Makoto Uedo's it would make a useful comparison. Basho is the benchmark. To stand on his shoulders is the way forward.