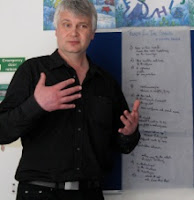 Alan Summers lives in the UK. He was introduced to haiku when he walked into a local branch library in Ipswich, Queensland, and found two copies of The Haiku Handbook. Coincidently the following year Bill Higginson issued a call for his Haiku Seasons Project which resulted in the books: The Haiku Seasons: Poetry of the Natural World; and Haiku World: An International Poetry Almanac.

Alan had two flying fox haiku published in Haiku World. Bill's warmth and incredible day to day contribution to the haiku community is still a constant and very important inspiration to him. He urges everyone to buy copies of all three of these books, saying you won't regret it for a single second of your life.

Alan has since been published in Japan; as well as in numerous American; British; European; and Australasian magazines; plus Japanese newspapers such as Yomiuri Shimbun and Mainichi Daily News.

He is the renga/renku editor for Notes from the Gean, a Journal of Japanese Short Forms; and Haijinx (humor in haiku) editor for the United Kingdom; Ireland; Australia; New Zealand; Africa and the Indian Sub-Continent.

Alan Summers is a Japan Times award-winning writer for haiku and renga and was recently involved in what is believed to be the world's first Sign Language Renga (see Notes from the Gean). Alan runs various live renga/renku events around Britain and has just been commissioned for a six months renga project involving a city in Yorkshire.

Alan also runs The With Words International Online Haiku Competition with the next one being planned for later this year.

1) Why do you write haiku?
My reasons have changed over the years, but mostly it sharpens my observational skills. We so easily overlook the smaller incidents of life which actually enrich our day to day existance.


2) What other poetic forms do you enjoy?
I write a hybrid form of ekphrastic poetry:

It was high praise from artist Paco Pomet when he said:

"I was really moved by [the poem] and it is definitely the best compliment a painting can have." Paco Pomet, artist, SPAIN


3) Of the many wonderful haiku you've written, what do you consider to be your top three?
I often gauge what might be considered a "wonderful haiku" of mine when the general public get excited about a simple haiku at a reading or performance; workshop; or other activity that I do under the banner of With Words. For my flying fox haiku please buy a copy of the Haiku World.

If you've been enjoying this weekly series and have not contributed, please consider sharing your response (whether it be for haiku or tanka) to the three little questions that Alan answered. You must be a published poet to participate.
Posted by Curtis Dunlap at 12:34 PM

Hi, Alan, So glad to see you finally joined us. That poem with Paco Pomet certainly has the kind of depth that fires your intensity. I have to say that writing a renku with you is the experience of a lifetime. I have yet to meet anyone who brings poetry, haiku, renku to the world, quite like you. Many thanks for all you have taught me.

Glad to see you here Alan. I especially like the first haiku. Makes you wonder if it is the rain or the person being buried that is "almost a friend." You are an inspiration to this fledgling haiku artist.

well it's about time kid! Well it's a little difficult picking a favorite, since i enjoy them all Alan!

Fine entry in this blogg: Alan is a very active and successful ambassador of haiku. One day I hope to come a little bit closer to that.

Good to see you on here, Alan.