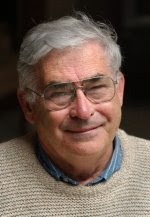 I have some very sad news for you today. Paul O. Williams passed away on Tuesday, June 2nd. Please keep the Williams family in your thoughts and prayers. All I know at this time is that he had an aortic dissection.

I had the pleasure of meeting Paul at Haiku North America 2007 in Winston-Salem. We composed a rengay during a workshop conducted by Garry Gay. I had never written in the form and was a little nervous. I mentioned my apprehension to Paul MacNeil who said, "You've got Paul as a partner; you're in good hands." He was right.

Paul O. Williams put my mind at ease and, before the workshop was over, we penned our rengay. I offer it here as a tribute to my partner and friend.

election day soon
his district not at all sure

the days grow shorter—
sunlight undulating
under the bridge

new generation
of fruit flies
in the compost heap


Paul and I corresponded two or three times a month. He was a frequent visitor to Tobacco Road, occasionally offering suggestions. Paul is the reason that you now see a picture of the poet along with Haiku - Three Questions. He enjoyed seeing the people he was reading about.

We will miss you, Paul.
Posted by Curtis Dunlap at 6:13 AM

Paul was -- and is -- a quiet and strong presence in North American haiku. His book, The Nick of Time: Essays on Haiku Aesthetics, articulates what might be considered a conservative view of the possibilities of haiku in English, but it is in no way a narrow view. It is a valuable set of ideas about haiku from one of our best.

We have lost a good, solid friend in haiku. So long, Paul.

What a wonderful man, and a great shock. It didn't seem like a few days ago that he was posting on one or more discussion sites.

I'll treasure his book "The Nick of Time" even more now, but then I always treasured it.

Curtis, if you, and maybe one or two others could make his wikipedia more complete that would be wonderful!

It touches my heart to read your poetic work (Paul O. Williams/Curtis Dunlap!

I did not know the man, but does it matter? One more island has been lost in the vast misty space of no beginning and no end.
Here I am, asamed to be alive each time someone leaves the Earth without his/her will and with no return.
My prayers... for ever...
Sasa

Curtis, very sorry for your loss ... a fine tribute, in both your words - very nice rengay.

what a loss to the haiku community.
i had the pleasure to meet Paul at HNA in 2007. he was a gentle & kind man; he will be greatly missed.

Paul was a faithful participant in the Shiki Monthly Kukai at haikuworld.org, sending us poems in fifty-three separate months over the past six years. We've posted a remembrance page, with his vote-fetching kukai entries here:

He will be missed by all of us at haikuworld,

one of my heroes!

Thank you for sharing your collaborations too Curtis. Paul will be in my thoughts:

dawn
caught in a dewdrop--
the empty swing

Sad news indeed. I deeply admire Paul's haiku and critical essays. I only corresponded with him a little, during the past few months. So glad I did.

Some of his fine nature-oriented work appears in a Montage, "The Good Earth," posted in April (along with haiku by Marian Olson and Paul MacNeil):

Another favorite haiku by Paul is the one he wrote in tribute to Nick Virgilio:

Thanks for posting this tribute, Curtis, including the photo and the rengay. This is a major loss for the haiku community.

What a wonderful tribute you put up!

My heart goes out to Kerrylynn Blau/Williams, in fact it tears me up to see her heartwrenching message, especially with such a lovely photograph of Paul which speaks volumes.

all those sunflowers
watching the slow tennis match
of the sun

I applaud you for recognising what a fine haiku this is. A little bit out of the ordinary, and full of enjoyable resonance.

I won't quote favourites because I want you to enjoy his kind of poetry: Remembering Paul O. Williams

Sad news indeed. For years Paul has been one of my icons in the world of haiku. Through his poetry and other writings, he has taught me much about this art. My first meeting with him was at HNA 2007; I shall treasure that memory.

I also received these heartfelt thoughts about Paul:

Paul will be missed. We've spent some quality time together when I first became President of HSA and later when I was in California and met with the haiku poets from Northern California. He was a fine poet and teacher and imbued with the spirit of haiku. His articles on haiku were always so enjoyable to read.

phoebe's longing -
the song lingers on after
he's flown away

"Bill and I always looked forward to talking with Paul at HNA and other conferences. He was a lovely man and a fine poet, and I will miss him. I have just written to KerryLynn expressing my sorrow at her loss, and telling her I know what she's going through. I hope she will talk with me if she needs to talk with someone who, not that long ago, also felt numb and in shock."

It is a great shock to learn about Paul's passing. The haiku world has lost a good practitioner and supporter of international haiku.
R K

I just had a note from Mike Rehling about his death. I didn't know him but his words are magic.

Though I learned of Paul's passing with the rest of you, it's taken me awhile to absorb the depth of our loss. I've read and returned again and again to read the many fine tributes, and the rememberance site sharing his Shiki Kukai submissions. Each time my heart sinks and soars all at once . . . missing his voice and yet absorbing all he shared with us. Though the following received few votes, it's one of my favorites of Paul's submissions:

so much season
in the reedy voice
of the cricket

My heart goes out to to his wife and family.