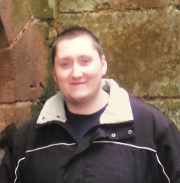 John McManus first came across haiku when he picked up a book of old Japanese poems in his local library and has been hooked ever since. He started to write in the hope that someday he could come up with a haiku as good as the ones that had inspired him. He began to send in submissions to various journals and magazines in the middle of 2010 and quickly found a network of friendly, intelligent poets who gave him many helpful suggestions and much needed honesty. John had his first lot of haiku published at the end of 2010 in The Heron's Nest and Notes from the Gean. When he isn't writing John likes to spend time with his wife and two young children.

When I started to write poetry I wrote longer rhyming poems and a bit of free verse sometimes. As I got more knowledgeable about the plethora of poetic forms there is to experiment with I went down to the local library, where I stumbled across a book of old Japanese poems. After reading it cover to cover several times I just felt I needed to try and master this brief but beautiful form, and I haven't stopped writing since. I love to play with words, and feel the ability to create a poem that says so much with so few words is a skill that only the sharpest of minds can achieve.

I really do love rhyming poems rather than free verse. Edgar Allen Poe’s work has heavily influenced my longer poetry style. If I am truthful not much contemporary poetry excites or interests me, I much prefer to read classical or modern lyrical poets.

a flock of blackbirds


If you've been enjoying this weekly series and have not contributed, please consider sharing your response (whether it be for haiku or tanka) to the three little questions that John answered. You must be a published poet to participate.
Posted by Curtis Dunlap at 4:14 PM

I like all these haiku, and fortunately had the privige of seeing some other fine work online as well as in print.

nice to see you here on the road, John! Enjoyed the haiku you shared very much.

Excellent Mr John.It is poetic with touch of vivid imageries.