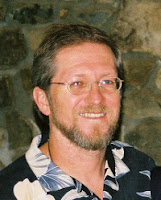 Jim Kacian is the creator of The Haiku Foundation, a nonprofit organization which begins January 1 2009 and is dedicated to archiving the first century of haiku in English and expanding the second; co-founder of the World Haiku Association, founder and owner of Red Moon Press, and past editor of Frogpond, the international membership journal of the Haiku Society of America. He has published thirteen books of haiku, all of which have received awards, the most recent of which is long after, published in Italy and appearing in three languages (English, Italian, German).

1) Why do you write haiku?
god only knows
it's a kind of curse, perhaps for some infelicity in a previous life, whereby i am now enthralled (often in the middle of what otherwise might be a perfectly enjoyable sleep) by the muse and must do her bidding
all i know is that i must continue, else lose it
and i don't wish to lose it . . .


2) What other poetic forms do you enjoy?
i enjoy pretty much all other poetic forms
a sestina with a toothsome falanghina, for instance, its darkness hidden within a bright surface
a terza rima requires brandy, a sonnet mead, and tanka sake (haiku is so much more shochu)
absinthe for vers libre, vodka for a quatrain, claret for heroic couplet, and for ballad perhaps a humble beer
for epic, something with legs, like a single malt, and i'm happy go to hell with a villanelle and gin


3) Of the many wonderful haiku you’ve written, what do you consider to be your top three?
a completely unfair question
so instead of choosing which amongst my children shall be overlooked, i'd prefer to offer three poems i particularly favor by other poets:


losing its name
a river
enters the sea


why go there
when it's here now?
the Cage exhibit


under the pier,
the sea roars in—
a woman, a man


thanks for having me, curtis


If you've been enjoying this weekly series and have not contributed, please consider sharing your response (whether it be for haiku or tanka) to the three little questions that Jim answered. You must be a published poet to participate.
Posted by Curtis Dunlap at 8:25 AM

a touch of
gray in yore beard?

full moon
depending on
her altitude

come visit
when you have less time

full moon
come again
when you have more time

So enjoyed your comments Jim. You brought a smile to my face on this cold, Sunday morning. Now I see why I do not do so well with other poetic forms--I don't have the right liquor in my glass!

Seriously, you have done so much for all of us who write haiku and if I were currently wearing a hat, I would take it off to you.

Jim's choices, characteristically made to reveal what is universal about the form (as opposed to just his own favorites of his own . . .), illustrate the amazing capacity of this modest three-line form to capture analogies BETWEEN the human subject and what is not human (call it nature?). To frame it in terms of contemporary thought, Jim's selection nicely illustrates the "metaxological" quality of haiku thinking, or the thinking made available by haiku. That may sound stuffy to some, but I find it exciting!

Oh, Jim, I was hoping for a good scotch (no ice)...Although I can no longer enjoy such things I find them in haiku...such as:
"dead reckoning the moment the tide reverses" ...from your little book "dead reckoning"... You've always been a great guide... Many thanks, Merrill

Since Jim didn't include any of his own stuff, I'm going to have the temerity of posting one of my favorites:

followed home
by a dog I don't know
autumn dusk

More of his work is also available on his Haiku Registry page at The Haiku Foundation (sorry - I don't know how to add hyperlinks in a blog message).

Happy holidays to all,
Billie