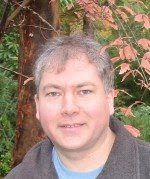 Like many in the haiku community, Michael Dylan Welch is a person of numerous talents. Not only is he a recipient of many awards (one linked here), he is also an editor, contestant judge, photographer, and publisher. He cofounded the Haiku North America conference in 1991 and the American Haiku Archives in 1996. He also founded the Tanka Society of America in 2000.

To me, haiku is an approach to infinity. It has an expansive quality that's somehow captured in what's small or brief or ephemeral. There's something transcendent about a good haiku -- it makes the universe feel right and whole. And even if not all haiku I read or write capture something transcendent, they are still a means of commemoration, little personal histories, celebrating not only one's five senses but the emotional feelings we have in relation to them. I've always been attracted to short poetry, so on discovering haiku (or rather, having it taught to me in a high school English class), I easily gravitated towards it. I now write haiku for the same reasons I take photographs -- I can't help it!

I've tried most of the set forms of poetry, to varying degrees of success -- triolet, villanelle, pantoum, limerick, cinquain, sonnet, and other forms. Each one has its challenges. And I particularly admire rengay. Aside from Japanese poetic genres, I gravitate most to nonmetrical poetry, however. I tend to apply organic form to both haiku and longer poetry (Denise Levertov has written some helpful essays on the subject). I'm also a board member of the Washington Poets Association (one of the largest state poetry organizations in the country), so I'm actively involved with many poets who don't write haiku -- organizing festivals, readings, and other events with the organization, and also helping to edit the WPA's annual journal, Cascade.

I'm glad you ask this question about other poetry forms because I think haiku has more or less put itself into a ghetto, and really has itself to blame for a perceived lack of respect from so-called "mainstream" poetry. But as Bill Higginson proclaimed in a presentation at the 2005 Haiku North America conference, "haiku IS mainstream." It's just that we reject mainstream adaptations of haiku because we think we're the only ones who have seen the light -- or we fail to see how we too have adapted haiku. Of course, there are still rampant misunderstandings out there, and worse yet is the indifference many people even in the literary poetry community have regarding whether they understand haiku properly or not. We can do what we can to offer informed understandings in a palatable way. But an additional step haiku poets can take is to stop keeping haiku to ourselves. We can send our best haiku, senryu, and haibun to nonhaiku journals, and send our news and announcements to publications such as American Poet, AWP's The Writer's Chronicle, Poets & Writers, American Poetry Review, and to leading online sites such as Poetry Daily. And if we also write and publish other forms of poetry, we can earn "mainstream" reputations for our poetry that can extend also to our haiku. As I said, if haiku is in a poetic ghetto, we largely have ourselves to blame.

I think everyone who answers this question must feel, like I do, that picking the top three is a difficult task, like saying which of your children you love most. So rather than worry whether they're my "top" poems, I'm just going to subjectively see what comes to mind. Turns out to be these:


first star —
a seashell held
to my baby's ear


Thanks for this opportunity, Curtis!


Next week, Ferris Gilli.
Posted by Curtis Dunlap at 7:05 AM

Loved seeing your Haiga Thanks